Boy, 15, becomes youngest ever to sail solo around Britain 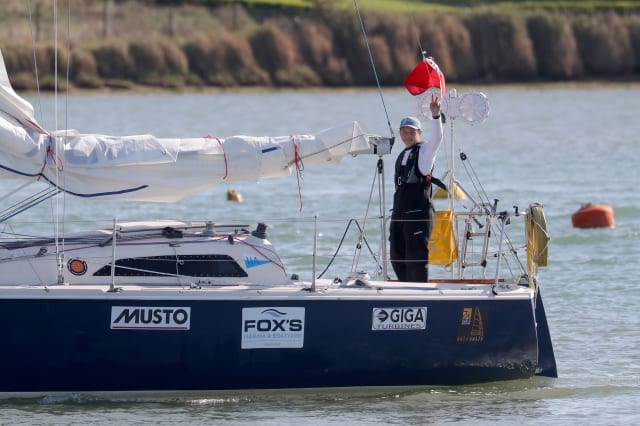 A teenage boy has become the youngest person to sail solo around Britain, aged just 15.

Timothy Long smiled as he arrived triumphantly back in port on Thursday having completed his epic 11-week journey.

During his long and arduous voyage he had to battle giant waves, gale-force winds and sail for 24 hours straight, sometimes sleeping for just 20 minutes at a time.

The young sailor took on the 1,600-mile solo journey and the many hazards the British coastline presents in an effort to raise money for charity.

Along the way, he met his idol Dame Ellen MacArthur who wished him well on the last leg of his journey.

Sailing single-handed on Alchemy, his 28ft Hunter Impala boat, he covered an average of 50 miles per day, but with several much longer passages of up to 100 miles, largely following the route Dame Ellen herself took on as an 18-year-old in 1995.

Timothy has now raised £7,300 for the Ellen MacArthur Cancer Trust, which helps young people rebuild their confidence after cancer through sailing.

He arrived back at sunny Hamble Point Marina near Southampton, Hampshire, just before 11am and was greeted by his family.

On his JustGiving page, Timothy said: “This is by far the hardest thing that I have ever done because when you are solo sailing there is no one there to help – no support boat, nothing.

“This means that you have to be able to do everything ranging from navigation to looking after yourself and knowing how to fix anything that goes wrong on the boat.

“The British coastline presents numerous hazards, from the busiest shipping lane in the world in the Dover Straits. to the extreme tides of the Bristol Channel, amongst many others.”

She said: “It is an incredible achievement for anyone to sail single-handed around the UK, but to do it at 15 really is something else.

“While Timothy will always have the personal satisfaction of that achievement, the legacy of what he’s done will be even more far-reaching in terms of helping to change the lives of young people in recovery from cancer.

“Young people are going to need the trust more than ever after Covid-19 as the pandemic has amplified the feelings of isolation, loneliness, anxiety, anger and fear experienced by young people undergoing cancer treatment and their families.

“I send Timothy my warmest congratulations and thank him on behalf of every young person the trust supports.”