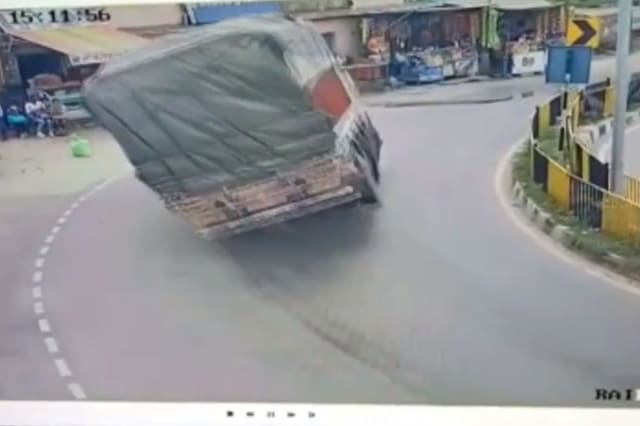 Shopkeepers are spooked after two trucks toppled over in separate incidents at the same spot in Jhunjhunu, northern India.

In the first incident on September 18, traffic police CCTV cameras near the railway station caught a speeding truck making a sharp turn and toppling over scattering its cargo.

A group of men, who were sitting close to the spot of the accident, had a narrow escape when they fled from the falling truck.

No one was injured, but local shopkeepers said their property had been damaged in the accident.

And as soon as they had repaired their shops, an almost identical second crash occurred.

On September 28, a truck carrying wheat bags sped along the road and toppled onto its side while making a sharp turn. Again, the incident didn't cause any injury, but shops in the vicinity were damaged.

According to local media, shopkeepers said the turn was dangerous, and officials had ignored their plea to set up speed bumps on the road.

Protesters march through London calling for end to lockdown 'tyranny'