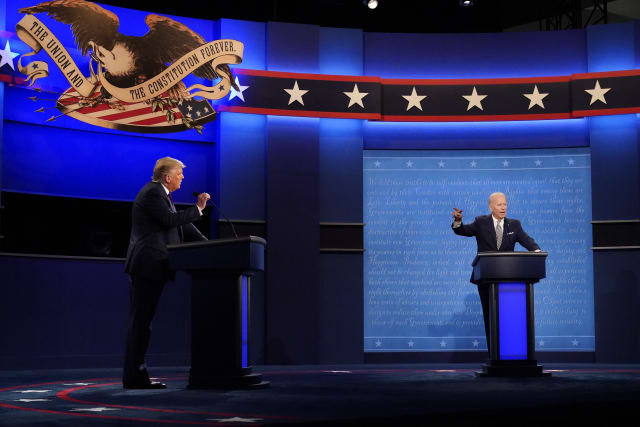 Traders on the London Stock Exchange made a meagre attempt to beat Tuesday’s falls following new estimates from the Office for National Statistics showing the UK economy fell less sharply in the second quarter than first thought.

They were also reeling from the first US presidential debate, trying to understand what it means for investors.

The UK’s second-quarter GDP slump of 20.4% was revised to 19.8%, but the negligible shift failed to gain much traction.

David Madden, market analyst at CMC Markets UK, said: “The bullish mood in the US has lifted sentiment on this side of the Atlantic.

“Steven Mnuchin, the US treasury secretary, said he will give one more go at trying to come to an agreement with the Democrats with respect to a coronavirus relief package, and that is assisting equities.

“Lately, the moves in the US have had an influence on European sentiment, and that is what we are seeing today.”

The GDP revision and further cooling from the Bank of England over the prospect of negative interest rates helped the pound gain against the dollar and euro. The pound rose 0.6% to 1.101 euros and 0.6% up to 1.293 dollars.

In company news, it was another savage day for job cuts, with Shell announcing plans to slash 9,000 positions worldwide, as oil prices continue to trade at rock bottom prices.

Advisers were happy as a series of takeover deals were announced.

Bookmaker William Hill confirmed it had accepted a £2.9 billion offer from US casino giant Caesars at 272p a share. Traders on Monday has been excited as rumours of a bid swirled – sending shares above 300p a pop, before falling back on Tuesday.

And outsourcing security firm G4S received an unsolicited formal offer for the company, valuing it at £3 billion. The approach by Canadian rival GardaWorld had been made direct to investors and the G4S board dismissed it.

Online fashion brand Boohoo said sales had been so strong it expects profits to beat expectations.

But condemnation that the money should be used to improve its supply chains amid accusations of having a threadbare compliance team left shares closing down 14.5p at 375.5p.

Retailer Topps Tiles failed to impress as the pandemic impact was laid bare. Despite revealing a 16.5% bounce in sales in the three months to September 26, shares closed down 4.6p, or 8.8%, at 47.6p.