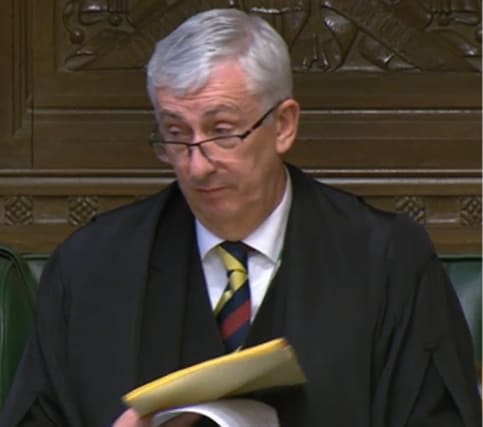 Ministers have promised MPs a vote on major new coronavirus restrictions “wherever possible” after being accused by the Commons Speaker of treating Parliament with contempt.

In a strongly-worded statement, a clearly angry Sir Lindsay Hoyle hit out at the “totally unsatisfactory” way Parliament had been sidelined, with new rules being brought in without scrutiny and sometimes published just hours before coming into force.

But the Speaker threw the Government a lifeline by ruling there would not be a vote on a rebel Tory bid to force ministers to give Parliament a greater say on future measures.

With more than 80 Conservative MPs backing the amendment tabled by the influential chairman of the Tory backbench 1922 Committee Sir Graham Brady, the Government had been facing almost certain defeat if it had gone to a vote.

In the event, the Commons voted to renew the emergency powers in the Coronavirus Act by 330 votes to 24 – a Government majority 306 – although only after Health Secretary Matt Hancock assured MPs there would be greater scrutiny in future.

However, he did not go far enough for some backbench critics, with seven Tory MPs voting against the measure.

Mr Hancock said that for “significant national measures” affecting the whole of England or the UK, the Government would consult Parliament and “wherever possible” hold a vote before they came into force.

He added however: “But of course responding to the virus means that the Government must act with speed when required and we cannot hold up urgent regulations which are needed to control the virus and save lives.”

Leading Tory rebels appeared to be satisfied by the concession – including Sir Graham who said it showed the Government now “understood the importance of proper scrutiny in this place and the benefits that can bring to better government as well”.

However others remained unhappy, including the vice-chairman of the 1922, Sir Charles Walker, who said it was an “utter, utter disgrace” that the Government was giving MPs just 90 minutes to debate the renewal of the emergency powers.

“Ninety minutes to debate the renewal of an Act that fundamentally has changed the nature of the relationship between the state and citizens is not good enough,” he said.

“I have to say, if this is the portent of the promises to come, it’s not good enough.”

Labour MP Chris Bryant said the concession to the Tory rebels amounted to “nothing”, adding: “It’s not worth the paper it’s not been written on.”

Ahead of the debate, the Speaker said he was unable to select any amendments to the proposed renewal of the powers as it could lead to uncertainty about the legal position “undermining the rule of law”.

However, he indicated his support for MPs who feel they have been shut out of the process of scrutinising regulations introduced to limit the spread of the virus by curbing people’s freedoms.

“All too often, important statutory instruments have been published a matter of hours before they come into force and some explanations as to why important measures have come into effect before they can be laid before this House has been unconvincing and shows a total disregard for the House,” Sir Lindsay said.

He called on the Government to “rebuild trust” with the Commons “and not treat it with the contempt that it has shown”.