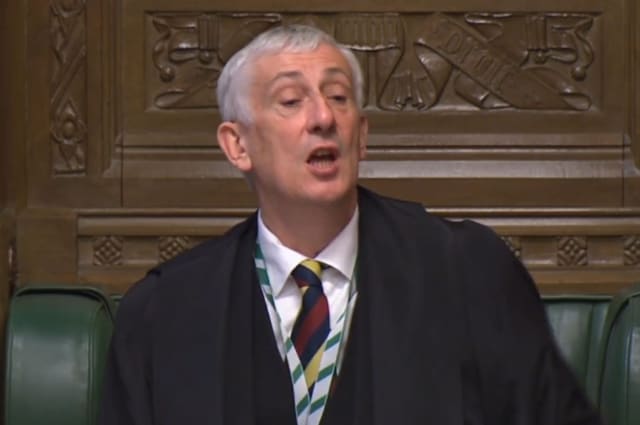 Boris Johnson’s Government has been forced to promise MPs a vote over major coronavirus laws “wherever possible” after being accused of treating Parliament with contempt by the Commons Speaker.

In a strongly worded statement, Sir Lindsay Hoyle hit out at the “totally unsatisfactory” way that Parliament had been sidelined, with new laws being brought in without scrutiny and sometimes published just hours before coming into force.

But the Speaker threw Mr Johnson a lifeline by saying there would not be a vote on a rebel Tory bid to require the Government to give Parliament a greater role in future.

“For significant national measures, with effect in the whole of England or UK-wide, we will consult Parliament – wherever possible we will hold votes before such regulations come into force,” he told the Commons.

“But of course responding to the virus means that the Government must act with speed when required and we cannot hold up urgent regulations which are needed to control the virus and save lives.”

The Commons is expected to back the renewal of the emergency powers in the Coronavirus Act later on Wednesday but more than 50 Conservatives had signed an amendment calling for ministers to give MPs debates and votes on measures.

The amendment, tabled by Sir Graham Brady, chairman of the influential Tory 1922 Committee, had enough support to inflict a defeat on Mr Johnson if opposition parties backed it.

Sir Graham said the move by Mr Hancock showed the Government now “understood the importance of proper scrutiny in this place and the benefits that can bring to better government as well”.

The Speaker said he was unable to select any amendments ahead of a vote on the renewal of the powers to avoid causing uncertainty and “undermining the rule of law”.

However, he indicated his support for MPs who feel they have been shut out of the process of scrutinising regulations introduced to limit the spread of the virus by curbing people’s freedoms.

“All too often, important statutory instruments have been published a matter of hours before they come into force and some explanations as to why important measures have come into effect before they can be laid before this House has been unconvincing and shows a total disregard for the House,” Sir Lindsay said, just before Mr Johnson faced Prime Minister’s Questions in the Commons.

He called on Mr Johnson’s Government to “rebuild trust” with the Commons “and not treat it with the contempt that it has shown”.

At Prime Minister’s Questions, Mr Johnson and Labour leader Sir Keir Starmer clashed over the response to the rising number of coronavirus cases.

Sir Keir said that only one area, Luton, had come out of a local lockdown and stayed out.

Mr Johnson suggested that was because “the local people pulled together to suppress the virus, to follow the guidance, and that is the way forward for the entire country”.

Sir Keir also accused Chancellor Rishi Sunak of withdrawing support from jobs which would be “viable” if they were not in areas which have suffered as a result of restrictions.

“The reality is the Chancellor has made a political choice to reduce economic support just when the new health restrictions are coming in,” Sir Keir said.

The Prime Minister criticised Labour’s response, saying: “One day, they’re theoretically marching side by side with the rest of us trying to defeat coronavirus, the next minute, they’re off in the undergrowth firing from the sidelines.”

Last week, the scientists published a projection that showed the number of new cases could reach 50,000 per day by mid-October, if cases doubled every seven days.

If such a projection was coming true, the UK would now be seeing around 12,000 new cases reported each day, but the latest daily total was 7,143.

The developments at Westminster came as:

– Local lockdowns will be introduced in Denbighshire, Flintshire, Conwy and Wrexham in North Wales from 6pm on Thursday, meaning that a third of the UK population will then be subject to some form of extra restriction.

– Planned surgery is being suspended as a result of restrictions imposed at the Royal Glamorgan Hospital in Llantrisant, South Wales, after 82 coronavirus cases were identified.

– Merseyside’s leaders expect extra restrictions to be imposed there but warned that the Government must prevent a “hammer blow” to the local economy.