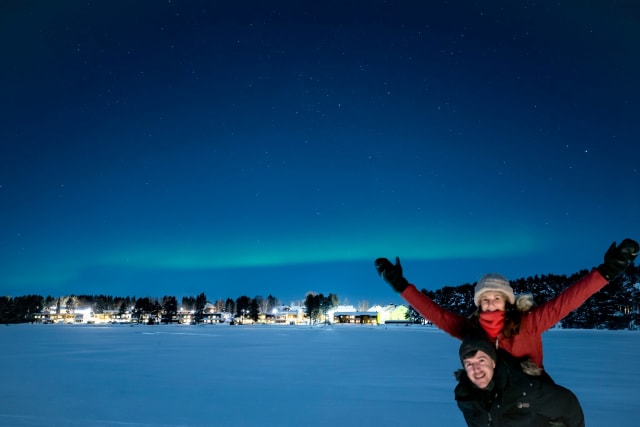 A Briton who traded working in a call centre to chase the aurora borealis across the world has said the natural phenomenon offers “a spiritual rush”.

Eight years ago Matt Robinson left his call centre role in Sunderland, Tyne and Wear, where he said he was “sick of life”, to join Kielder Observatory in Northumberland as a science communicator.

He has since worked as an astronomer for celebrities including Coldplay’s Chris Martin and seen the aurora hundreds of times in countries across the world.

“It’s wild when I think about it because I’m just a lad from the north, but the risks have paid off up to now,” said the 34-year-old, who spoke to the PA news agency from a fjord in the far north of Norway.

“Just before I left the observatory, my best friend died, he was 31… so for around six months I was in a daze.

“I decided I had to live because he no longer was and I’ve never looked back.”

After seeing the northern lights for the first time in Whitley Bay five years ago, Mr Robinson moved to Finland to work for holiday company the Aurora Zone.

From there the 34-year-old took astronomy jobs in Chile and the Maldives.

Working in an open-air restaurant in the Maldives, he would point out stars to celebrity guests, including Coldplay’s Martin, actress Gwyneth Paltrow and WWE wrestler Randy Orton.

“They would dine and I’d show them galaxies, planets, tell them about the constellations,” Mr Robinson said.

“It was amazing, it didn’t matter how big a ‘star’ they were, they all absolutely loved it.”

He also met his Swedish girlfriend Jacqueline at the restaurant and they now live in Norway.

The pair moved there in December to start a content-creation business, making films and advertisements, until their plans were stalled by the coronavirus outbreak.

However, the pandemic restrictions have given them plenty of time to chase the aurora borealis.

“The amazing thing is, you never know what you’re going to get – it could be quite uneventful or totally unforgettable,” Mr Robinson said.

“The feeling you get when seeing the northern lights pulsing, flowing, and dancing above your head is like a spiritual rush.

“As humans, we see the sky above us and also space as difficult to reach, so therefore a place of wonder.

“To then see these lights then flowing across like rivers of light really does make you want to worship it, I’m not religious… but if I were, my god would be the aurora borealis.”

The aurora is a natural display of light caused by interactions between the Earth’s magnetic field, molecules in the atmosphere and the solar wind. It can be seen around the poles, with the Southern Hemisphere version called aurora australis.

“(The solar wind) is a steady stream of particles with is thrown out by the sun constantly,” Mr Robinson added.

“It’s these particles that cause the northern lights when they connect with oxygen and nitrogen molecules in the Earth’s atmosphere.”

Thought usually visible only in the far north or south, Mr Robinson said the aurora has been on show in the past few days in north-east England due to an increase in the speed of the solar wind.