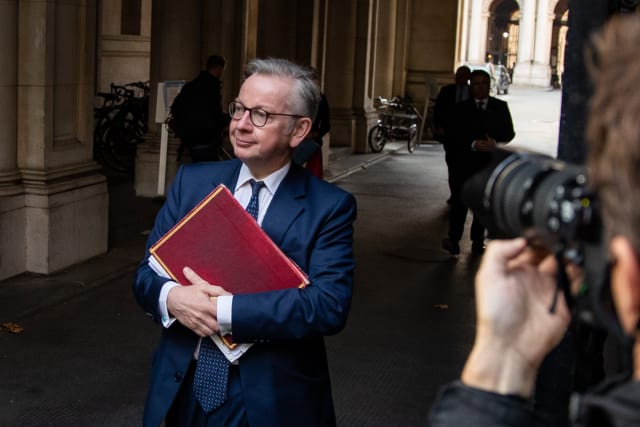 A dispute between Holyrood and Westminster over controversial post-Brexit legislation could end up in court – after a key ally of the Prime Minister indicated the UK Government will push ahead with the Internal Market Bill without the consent of Holyrood.

Cabinet Office Minister Michael Gove insisted he wanted to secure the backing of MSPs for the UK Internal Market Bill, as he dismissed concerns about it as “mythmaking” and “stories to scare children at bedtime”.

But Scottish Constitution Secretary Mike Russell has already confirmed ministers at Holyrood will refuse consent – with Holyrood likely to follow suit when the issue comes before MSPs for a vote in the coming days.

In that circumstance, Mr Russell said that “the UK Government has to decide if it’s going to act in a dictatorial fashion and simply ignore the Scottish Parliament”.

If that happened, Mr Russell told BBC Radio Scotland, there could be court action from Scottish ministers against the UK Government.

He insisted: “I’ve said from the beginning we will take all options, up to and including legal action.”

Mr Gove said he hoped that as the “bogus arguments against the Bill are exploded” MSPs could be persuaded to back the new law.

But he said if they did not it was “vitally important” that the UK Government act to ensure the continued smooth running of trade between the four nations.

Mr Gove was pressed on the issue when he appeared before Holyrood’s Finance and Constitution Committee, with Green co-leader Patrick Harvie telling the UK minister he looked like “someone who is required to ask for consent but who doesn’t ultimately care if consent is given”.

Mr Gove said that under the Sewell convention, the UK Government would “not normally proceed with legislation if it touches on devolved competences without the consent of the devolved administration”.

But he insisted: “Leaving the European Union is not a normal occurrence, it is an exceptional one.

“I hope that we will secure a legislative consent motion but of course it is vitally important that we safeguard the UK internal market.”

Mr Harvie then asked: “So you don’t actually care about whether we consent or not?”

Mr Gove told him: “I do, that is why I am appearing here, because as the various bogus arguments against the Bill are exploded, so I hope more and more people will realise it is a useful, indeed helpful piece of legislation that strengthens devolution.

“I hope that as people have cause to reflect, support for the legislation will therefore be forthcoming at Holyrood.”

He hit back at claims from Scottish Government ministers that the Bill is a Westminster “power grab”, insisting to the committee such concerns  were “misplaced”.

He criticized the “misinformation and mythmaking about the legislation”, telling MSPs: “There have been all sorts of myths that have been put about, which are nonsense. They are stories to scare children at bedtime, not real reflections of policy.”

Mr Gove said: “I think it is important to recognise that while the whole United Kingdom was in the European Union the operation of all our legislatures was constrained by EU law.

“Now that we’re outside all of the legislatures will have more power.”

While concerns have been raised about the impact powers the Bill gives UK ministers to spend money in devolved areas, Mr Gove said the Government was “absolutely committed” to the Barnett formula – which is used to determine levels of spending in the different parts of the UK.

He also strongly rejected claims that it could lead to privatisation within the NHS, describing this as being “one of the most absurd, ludicrous and frankly irrational fantasies I have heard in my political lifetime”.

Mr Gove added: “The reason that we are so clear about this is our NHS is not for sale under any circumstances.”