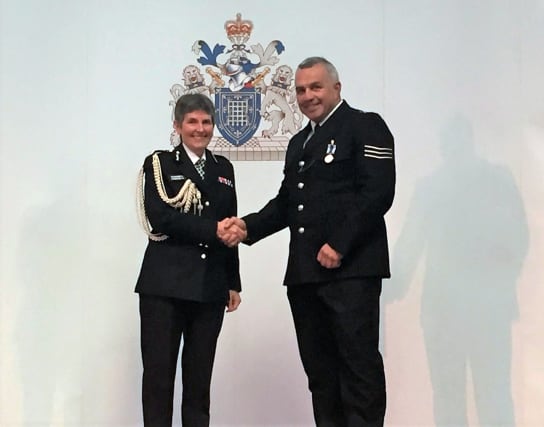 The partner of murdered police officer Matt Ratana has paid tribute to “her gentle giant”.

Su Bushby, who was with the Metropolitan Police Sergeant for five years, released a statement through the force saying she thinks of him “with tenderness and love”.

Her tribute came after MPs in the House of Commons fell silent on Monday afternoon to pay their respects to the experienced officer, who was shot dead on Friday.

The 54-year-old was killed by a handcuffed suspect at a custody suite in Croydon, south London.

Ms Bushby said: “There aren’t really any words for how I am feeling right now about the loss of Matt; about losing someone I loved and was so close to in such a tragic manner.

“I know Matt touched many, many people’s lives with his friendliness, patience, kindness, enthusiasm and caring ways.

“I had the pleasure of sharing five years of my life with this lovely man – my gentle giant, with his infectious smile and big heart. I think of him with tenderness and love.

“Matt was my partner, friend, confidant, support and soul mate.

“He will be greatly missed but never forgotten. Matt will always be in my head and in my heart.”

The New Zealand-born Metropolitan Police officer of almost 30 years has been described as someone who epitomised the role police play in protecting others and, as head coach at East Grinstead Rugby Club, was said to be an “irreplaceable figure”.

A string of community leaders and charity bosses in Croydon paid tribute to him in a video shared on social media on Monday.

In the Commons, Speaker Sir Lindsay Hoyle invited members in the chamber including Home Secretary Priti Patel to pay their respects.

He said: “I am sure all honourable members will wish to join me in paying their respects to Police Sergeant Matt Ratana, who was killed in the course of duty on Friday, and sending our condolences to his family.

“Yesterday was National Police Memorial Day, and I ask all honourable members to stand and observe a minute’s silence to mark that occasion and to remember Matt Ratana.”

Mr Ratana’s suspected murderer, widely reported to be 23-year-old Louis De Zoysa, remains in a critical condition in hospital after he was also hit by a bullet following the killing.

He had been arrested for possession of ammunition and possession of class B drugs with intent to supply following a stop and search, before being handcuffed and taken to Croydon Custody Centre on Friday.

No police firearms were discharged in the incident, and the case is not being treated as terror-related.

So far, the investigation has seen police searching an address on Southbrook Road in Norbury, south-west London, and another on Park Road, Banstead in Surrey.

A man has also been arrested in Norwich, Norfolk on suspicion of supplying a firearm.

Multiple tributes have been paid to the New Zealand-born sergeant since his death, including from the country’s Prime Minister Jacinda Adern.

Metropolitan Police Commissioner Dame Cressida Dick said he was an “extraordinary person” who was “very good at his job”.

She said his “terrible” death might bring home to people the challenges of police work, helping them to “see us police as who we are – human beings, going to work to help people, to support people and to protect people”.

She added: “Matt was the epitome of that.”