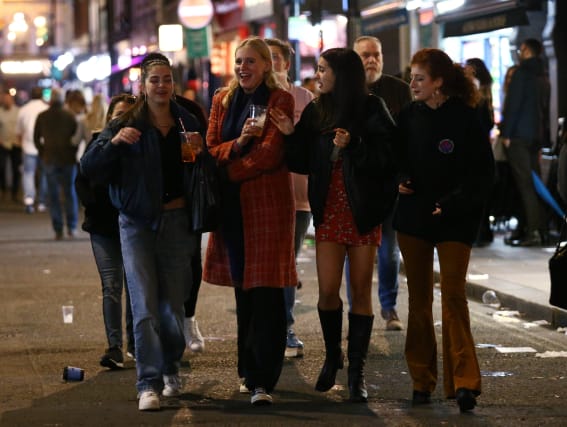 Ministers are under growing pressure to review the “hard” 10pm curfew on pubs, bars and restaurants amid criticism that the new rules are leading to revellers filling streets en masse.

Crowds of people were pictured on Saturday night gathering in city centres and piling onto public transport, while long queues formed at off licences after venues kicked customers out at 10pm.

The rules – which came into force in England on Thursday – mean all hospitality venues must shut at 10pm, rather than just call last orders, in a bid to stop the spread of coronavirus.

But Emma McClarkin, CEO of the British Beer and Pub Association, urged ministers to review the curfew and give venues more flexibility on closing times to allow customers to stagger their exits.

She told the PA news agency: “The curfew has been another devastating blow to the beer and pub sector. We have invested millions in creating safe socialising environments and had been slowly winning back the confidence of our customers and rebuilding our trade.

“As we have seen this weekend, the hard 10pm curfew has led to the consequence of customers leaving venues and filling the streets en masse. We would like to see the hard 10pm reviewed to allow us flexibility on doors closing time and allow customers to stagger their exits.

“Having not been consulted by the Government on the announcements last week, we do stand ready to work with the Government to find the safest and most practical ways to tackle coronavirus whilst crucially keeping our businesses and the hundreds of thousands of jobs they provide alive.”

He wrote on Twitter: “It’s very clear, across the UK, that this ill-thought-out 10pm curfew, has pushed everyone out of venues with socially distanced measures, into the streets, into off-licences, supermarkets, overcrowded public transport and house parties.

“Every operator predicted this. Shambolic.”

Shadow justice secretary David Lammy also criticised the curfew for leading to a “situation where people are bubbling out of pubs, they’re hanging around towns and they’re potentially spreading the virus”.

And senior Conservative MP Tobias Ellwood said the 10pm closing time “makes no sense”, as he pointed to figures suggesting only 5% of coronavirus outbreaks are linked to hospitality.

Culture Secretary Oliver Dowden insisted on Sunday that there was “definitely science” behind the curfew, despite a scientist advising the Government saying he had “never heard” the measure discussed at Sage meetings.

Mr Dowden said: “There is definitely science behind it, that’s why we’re requiring people to be seated in pubs and restaurants, so that stops the flow of them to and from the bar.

“We are reducing the closing times to stop people staying later and drinking. And the point about all of this is that everyone has their part to play. If we all play by the rules, we can ensure that there are not further, more draconian restrictions.”

In Wales, alcohol sales are banned after 10pm, but customers are given an extra 20 minutes to finish their drinks after last orders.

Licensed premises are only able to provide table service for customers when consuming food or drink, and following a 20-minute period to allow customers to finish their drinks at 10pm, must close by 10.20pm.