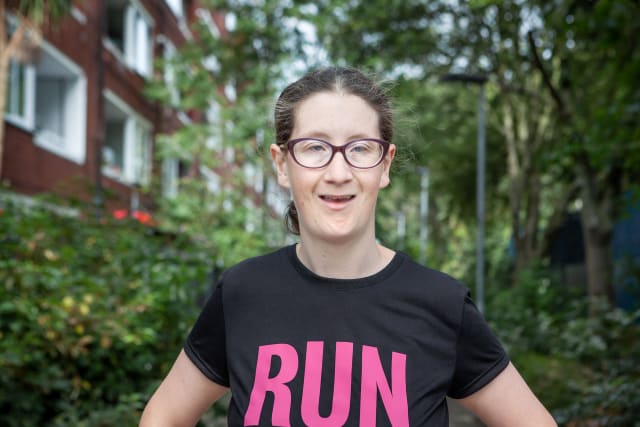 The big event will not take place this year but Mencap, the London Marathon’s charity of the year, hopes the virtual race will still raise awareness of what people with a learning disability can achieve.

Ten runners with a learning disability are among 312 people supporting the charity by completing 26.2 miles on October 4.

Among them is Tesco worker Charlotte Aspley, 30, from Lichfield, Staffordshire, who has Mosaic Down’s syndrome which gives her poor muscle tone and visual impairment.

She said people with a learning disability are “not all that different”.

“Just like you, I have hopes and dreams. And guess what one of those dreams is? To run the 2020 Virgin Money London Marathon for Mencap.”

Miss Aspley, who has run the London, Berlin and New York Marathons previously for Mencap, said: “When I left school, I was supported by Mencap to get my first ever job. I’m one of the lucky ones because only 6% of people with a learning disability have a paid job.

“Now I’ve been working there for 10 years and I love it.”

Aaron Plummer, 20, from Walthamstow, east London, who has cerebral palsy and a learning disability, will be completing his first marathon.

“Don’t let anyone stand in the way of your dreams,” he said.

“What you want to do, you can do. Just put your mind to it and achieve it.”

Mr Plummer’s dream is to run his own hotel but he struggled to get work after college until Mencap’s supported-internship programme found him a placement with hotel chain Novotel. He was later offered a job as conference porter.

Last year Dementia Revolution – a year-long campaign formed by charities Alzheimer’s Society and Alzheimer’s Research UK – set a new record for the highest amount raised by the London Marathon charity of the year with £4 million.

She added: “It is important to remember that this has been an incredibly difficult time for many and the 1.5 million people with a learning disability in the UK are one group who have been hit hardest.

“Our life-changing programmes will be needed now more than ever.”

The charity hopes to raise £1.5 million to fund All Move, an inclusive sports programme for children aged 11-16 in schools in England and Wales. It aims to change attitudes towards disability through direct contact between children of different abilities.