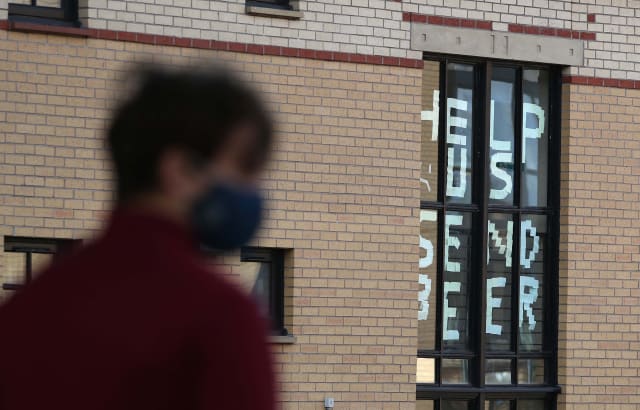 University students should be able to return home to their families at Christmas if the country “pulls together” and observes the new coronavirus rules, a Cabinet minister has said.

The Government is under pressure to guarantee young people are not confined to their halls of residence over the festive period because of Covid-19 outbreaks on campuses.

Thousands of students are currently self-isolating in their rooms following a surge in cases at institutions including Glasgow, Manchester Metropolitan and Edinburgh Napier.

Labour has asked Education Secretary Gavin Williamson to “ensure that every student has access to testing to allow a safe journey home” for Christmas.

But Culture Secretary Oliver Dowden said it would only be possible for young people to visit their family at the end of term if the country follows existing guidance.

He told Sky News’s Sophy Ridge On Sunday: “I very much want students to be able to go home at Christmas, and if we all pull together and observe these new rules, we follow the guidance, then we will be able to get to a point where that should be possible.”

Mr Dowden also insisted there was “definitely science” behind the 10pm curfew for pubs, bars and restaurants – despite a scientist advising the Government saying he had “never heard” the measure discussed at Sage meetings.

But the Culture Secretary said: “There is definitely science behind it, that’s why we’re requiring people to be seated in pubs and restaurants, so that stops the flow of them to and from the bar.

“We are reducing the closing times to stop people staying later and drinking. And the point about all of this is that everyone has their part to play. If we all play by the rules, we can ensure that there are not further, more draconian restrictions.”

Infectious disease modelling expert Professor Graham Medley said on Saturday he did not recall the curfew being discussed by Sage.

– An issue preventing users of the NHS Covid-19 app in England logging a positive test result has now been resolved, but people who book a test outside the app still cannot log negative results.

– There were a further 6,042 lab-confirmed cases of coronavirus in the UK as of 9am on Saturday, taking the overall number to 429,277. A further 34 deaths were recorded.

– Tory backbenchers have continued to press the Government to give MPs a chance to vote on coronavirus measures before they come into force, with MP Steve Baker warning that “liberty dies” with the Government “exercising draconian powers” without parliamentary scrutiny.

– Frontline workers who played a key role in the coronavirus pandemic response will be recognised in the Queen’s Birthday Honours next month, the Prime Minister said.

More than 17 million people – a quarter of the UK population – will be under tougher coronavirus restrictions later on Sunday as new measures are introduced in Cardiff and Swansea from 6pm.

Bans on households mixing came into force in Wigan, Stockport, Blackpool and Leeds on Saturday, while stricter rules are already in force across large swathes of north-west England, West Yorkshire, the North East and the Midlands, as well as parts of west Scotland.

A ban on households mixing indoors was extended across Northern Ireland earlier this week.