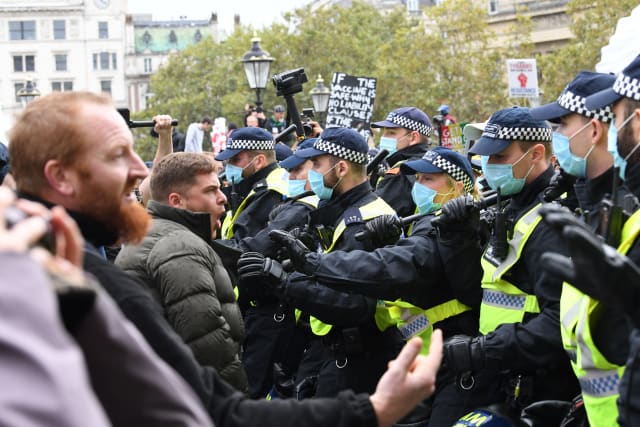 Thousands of people massed in Trafalgar Square on Saturday carrying a variety of signs, flags and placards to take part in a “we do not consent” rally – with none appearing to wear face coverings or to social distance.

But officers clashed with protesters when police tried to shut the event down because crowds were not complying with social-distancing rules.

Bottles were thrown and police used batons against protesters, leaving some with visible injuries.

At least three protesters and one officer were treated by medical staff.

Scotland Yard said that 10 people had been arrested following the demonstration, which moved from Trafalgar Square to Hyde Park.

A total of four officers were injured, two of whom required hospital treatment, the force added.

The Met said on Twitter: “Ten people have been arrested following demonstrations in Trafalgar Square, which moved to Hyde Park.

“Sadly, four of our officers have been injured, two require hospital treatment.

“We continue to urge crowds to disperse. This protest is no longer exempt from the regulations.”

The Metropolitan Police said the protest was stopped because crowds had not complied with social distancing and risked spreading coronavirus.

The force said demonstrators were asked to leave and warned that anyone who stayed could be subject to enforcement action.

Officers penned the crowd in Trafalgar Square and water was thrown at them by demonstrators, while crowds also chanted “pick your side” at the officers.

Police removed sound equipment from Trafalgar Square and several protesters were led away in handcuffs.

Another demonstrator was physically carried away from the scene by officers.

The force said: “Crowds in Trafalgar Square have not complied with the conditions of their risk assessment and are putting people in danger of transmitting the virus.

“This has voided their risk assessment and we have informed the event organisers they are no longer exempt from the regulations.

“We are now asking those in Trafalgar Square to leave. Officers will be engaging with crowds and informing them of this development.

“By leaving now, you can keep yourself safe and avoid any enforcement action being taken by officers.”

Earlier, police searched a man and confiscated a makeshift riot shield he was carrying.

The protest comes a week after a separate event which saw more than a dozen officers injured when a “small minority” targeted police and more than 32 arrests were made.

The Met said it had been engaging with organisers throughout the week to remind them of their legal obligations and explaining the events could be in breach of coronavirus regulations.

While protests are exempt from the “rule of six” in England, organisers must submit a risk assessment and comply with social distancing.

In Pictures: Horror home decked out for Halloween celebrations

The Met showcases fashion through the ages