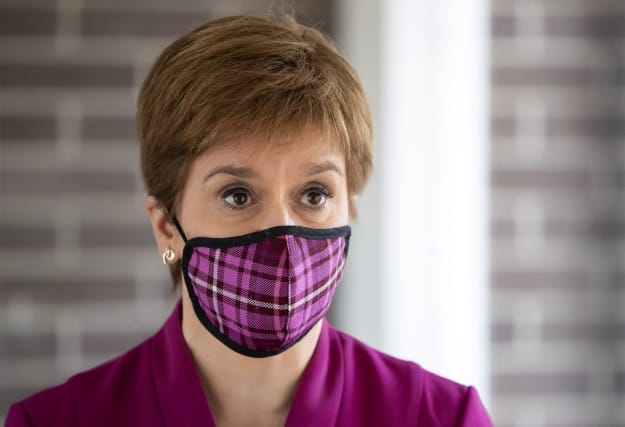 Nicola Sturgeon has backed disciplinary action being taken as a “last resort” against students who breach new rules aimed at curbing the spread of Covid-19 on university campuses.

Speaking as the daily increase in cases reached a record high, with 558 Scots testing positive in the past 24 hours, the First Minister said that for those who are “flagrantly breaching rules, then of course discipline and enforcement has to be part of the answer”.

University principals – backed by the Scottish Government – have made it “absolutely clear” to students that they must not take part in house parties.

As part of efforts to prevent outbreaks in university campuses from spreading into the wider population, all students are being asked to avoid pubs this weekend.

In addition, universities will adopt a “yellow card/red card” approach to breaches of discipline, with students warned the consequences could include “potential discontinuation of study”.

Bruce Adamson, the Children and Young People’s Commissioner for Scotland, has raised concerns about the human rights implications of such measures, saying he is seeking an “urgent conversation” with ministers and universities “to establish the nature and legal basis for these restrictions”.

Asked if she supports such a tough stance, Ms Sturgeon said: “Yes I do support universities taking disciplinary action as a last resort, and as a back stop.

“I would not expect universities – and I spoke to principals this morning and I know this is not their intention – to use discipline as a first resort.

“But as with the police, if you have people who are just flagrantly breaching rules then of course discipline and enforcement has to be part of the answer.”

The National Union of Students has claimed students are being “unfairly” blamed for spreading the disease, and it condemned the “unjustified step of applying different rules to students over and above the rest of the adult population”.

But hundreds of students are currently self-isolating after outbreaks of the virus at Glasgow, Edinburgh Napier and other universities.

The latest daily coronavirus figures also show a rise in positivity rates – with almost one in 10 (9.5%) of those tested confirmed as having Covid-19.

At her coronavirus briefing on Friday, Ms Sturgeon also expressed sympathy for students, many of whom will be living away from home for the first time and could being having to self-isolate in halls of residence.

She insisted the decision to allow students to return to campus was not linked to the drop in income universities would have suffered had they been told to stay away.

Describing herself as the “devoted auntie” of someone who has just left home to go to university, she told students directly: “I am so sorry, so heart sorry, that this time of your lives is being made as tough as it is just now.

She said the Scottish Government is considering whether self-isolating students could be allowed to return to their family homes, adding guidance on this may be issued over the weekend.

She said she did not want to “underplay the significance” of asking students not to visit pubs this weekend, but said it is not the only difficult request she has made during the pandemic.

Ms Sturgeon said: “I have asked people for six months now not to visit their vulnerable relatives in care homes.

“I’m having to ask people to do really difficult things all of the time.

“So I am asking all students for a weekend to not go to pubs, and hopefully that will help us stem these outbreaks.”