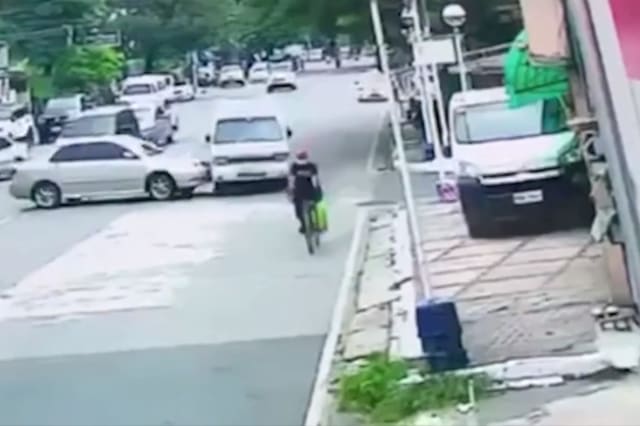 A lucky cyclist was seconds from being killed when a car rammed into a minivan, flipping it over just a few feet from him.

The man was riding along a busy road in Manila, the Philippines, when the crash happened at a junction.

CCTV footage shows the rider casually pedaling his bike, while behind him a white car emerges from an intersection and rams a minivan before falling on its side.

He looks over his shoulder before continuing on his journey - with fate clearly on his side.

Local government official Michael Zarate said he was working at an office in Manila City when he heard a loud crash outside.

It all happened behind the cyclist, who passed by the area after shopping for food in the nearby market.

Village officer Zarate said: "We usually get these accidents here so we had put up a sign on the road to slow down."

No one was seriously injured in the incident and both drivers were only slightly bruised.