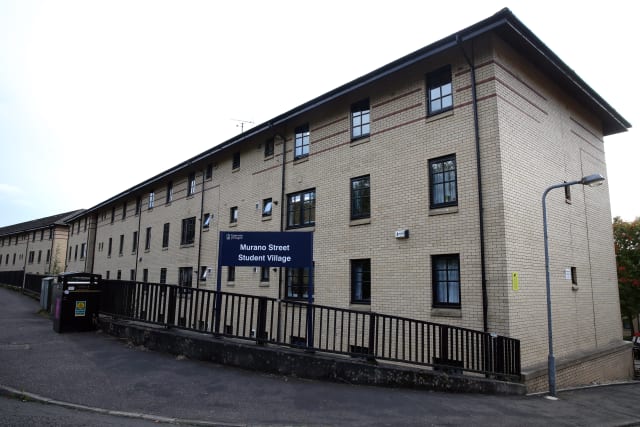 Students who contracted coronavirus after starting university have said an outbreak in their accommodation was inevitable.

One student said she has now been isolating for nearly a month, having been placed in an initial 14-day quarantine on arrival from California.

The teenager and three other people in her eight-person flat in Glasgow University’s Murano Street Student Village have now tested positive for Covid-19.

The complex is the university’s largest halls of residence and can house 1,175 students.

The 18-year-old, who is studying international relations and sociology, said she is having to wash her clothes in the sink as the laundry is outside the flat.

The residents of the flat had already been isolating for five days when she received her positive test result on Friday morning.

She said: “With this many kids in this small an area, it was bound to happen.

“We have it, so the negative people are cooking. They will drop off food outside our doors.

“It’s really hard not to mix, our kitchen is small and we have to share a bathroom. We’ve been wearing masks.”

She said she has been getting support from her family and new flatmates.

“I’ve been watching a lot of movies and just trying to focus on other things,” she added.

One flatmate, 19, from London, who also tested positive on Friday morning, said he arrived late to the flat and it had already been placed in isolation.

He said: “It’s freshers’ week – it just happens. You couldn’t stop it if you tried.

“I was washing my hands everywhere I went.

The flatmates had already booked a test at Glasgow Caledonian University in another part of the city before they discovered a mobile testing unit had been set up at Murano Street.

Another student in separate accommodation at the complex said there had been some positive cases in her 12-person flat, but she had tested negative.

The 19-year-old from London, who is studying medicine, said: “The uni put in place all the precautions they could, but things happen.

“As much as it’s horrible to have to be isolating already, we’re still getting to know each other so it’s not as bad as it could be.”