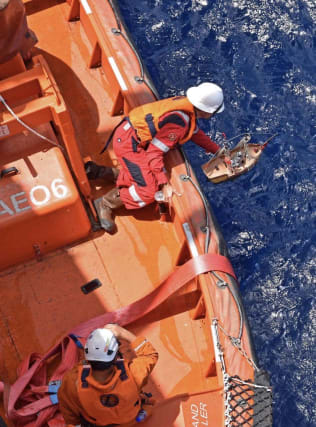 Adventures inspired by a toy pirate ship that crossed the Atlantic are continuing with the launch of another Playmobil boat near to where the last one disappeared.

Brothers Ollie, 11, and Harry Ferguson, eight, from Aberdeenshire, made headlines when their toy ship travelled more than 3,700 miles to reach the Caribbean after it was launched around 100 miles off the coast of Mauritania in West Africa in 2017.

The toy ship, called Adventure, was fitted with a tracker to pinpoint its location and has not been heard of since it was last recorded around 30 miles off Barbados in May 2019.

However, a family in Trinidad with three young boys who had heard about the ship’s journey were inspired to continue the adventure by launching another boat.

They contacted the Ferguson family, who sent them a spare Playmobil ship they had and chatted with them over video calls to explain how to modify the boat and make it fit to face the sea waves.

MacNeill Ferguson, father of the two boys, said: “We set up video conferencing during lockdown and Ollie and Harry shared their engineering experience from the first boat with the Lewis family.

“We sent a second Playmobil ship (the same model) out to the Lewis family who then rebuilt Adventure2 in exactly the same way that we had our first version.”

It is fitted with a tracker donated by the Caribbean Oceanography Aquaculture and Subsea Technology Foundation of which Mr Lewis is a co-founder and director.

Mr Ferguson said his sons are excited the adventure is starting again.

He told the PA news agency: “Following the original boat was just such a big deal for such a long time and then it just disappeared and they didn’t understand why and it felt a little bit flat and they were a bit deflated because we never found the boat.

“The longer it has gone, the less likely it is that we are going to find it.

“So they are really pleased someone is doing it with the other boat.”

It is expected that currents will carry Adventure2 towards Trinidad and then on into the Caribbean Sea and she may then be caught up by the Gulf Stream and could possibly float back across the Atlantic towards the UK.

The boat’s journey can be tracked at https://track-adventure.squarespace.com

The Ferguson brothers’ Playmobil pirate ship has been recognised by the Guinness Book of Records as Most Travelled Toy Ship.

The siblings first launched the ship, called Adventure, from Peterhead, Aberdeenshire, in May 2017 and it sailed to Denmark, then on to Sweden and Norway where it was found by nature officials.

It carries a message asking anyone who finds the boat to send them a picture and launch Adventure back into the sea.

The toy was then transported more than 3,000 miles south to the Atlantic by Christian Radich, a Norwegian full-rigged ship, which offered to help it on its journey.

The Ferguson brothers feature in a book titled Ollie And Harry’s Marvellous Adventures, which aims to inspire other children to have adventures.

More information can be found at https://www.facebook.com/tdajp/