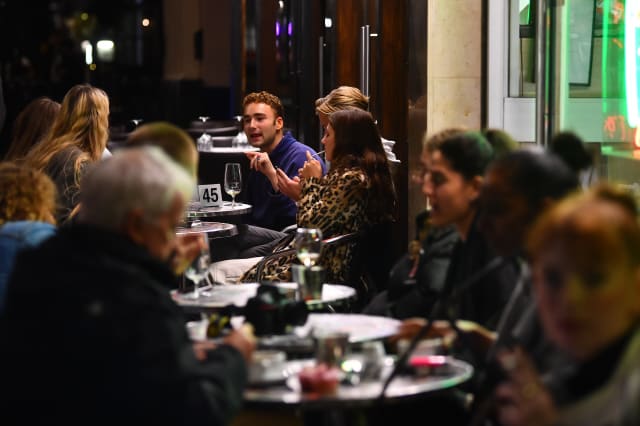 Hospitality firms hit hard by the pandemic said their hopes were “crushed” after the Chancellor announced his latest economic support package, and the measures “don’t go far enough”.

The chief of pub giant Young’s, Patrick Dardis, was among leaders to criticise the new measures, saying they will “not stop businesses from laying off staff”.

Bosses said that greater support is still needed to aid the recovery of pubs, bars, restaurants and other businesses, although trade groups hailed Rishi Sunak’s decision to extend VAT cuts.

He announced plans to extend a current 15% cut on VAT for hospitality and tourism firms from January until the end of March.

The move, which maintains a VAT of 5% on food, non-alcoholic drinks and accommodation, was welcomed by industry leaders.

He said: “We can only afford to operate the new restricted hours and the work from home message with a much-reduced workforce.

“This will not stop businesses from laying off staff.

“Our plan before today’s announcement will not alter as a consequence of what was said today.

“If we have to close some businesses, we will mothball those and will not carry a workforce in the hope they will reopen any time soon, or indeed, at all.”

Meanwhile, David McDowall, chief operating officer of Brewdog, tweeted to say that the “hopes of our sector have been crushed”.

He said the new plans are “just not enough to avert a crisis facing thousands of businesses and hundreds of thousands of livelihoods”.

“The industry is still dealing with the crippling after-effects of the nationwide lockdown, and the cumulative effect of the new restrictions, combined with the singling out of pubs, mean the measures announced by the Chancellor don’t go far enough, especially for drink-led city centre pubs,” he said.

About 37,630 pubs across the English regions, and 3,118 in Wales, will be under the new 10pm curfew on Thursday, according to real estate adviser Altus Group.

“We need Government to go further in hospitality, recognising the greater restrictions imposed upon us, and pick up the full cost of unworked hours,” she said.

“Full support to sustain people in their jobs during what could be a pretty bleak winter for hospitality would be a great step forward.

“The Chancellor has given us some reason to be positive again, but we urge him to engage with the trade on specific measures to keep people in work.

“While some of these measures announced today will give businesses a future to shoot for, and hope that they can begin to rebuild, we are still not out of the woods.”

Tom Ironside, director of business and regulation at the British Retail Consortium, said the new jobs programme will “help reduce job losses” at eligible firms but called for an extension to the current business rates holiday.

Other trade groups, such as UKHospitality, had called for an extension to the business rates holiday for hospitality and retail firms for the 2021-22 financial year, before the Chancellor’s speech.

Mr Ironside said: “Retail is on a delicate path to recovery, but the looming threat to this remains the £8 billion business rates cliff-edge from April 2021.

“Retailers need certainty and the Chancellor must take action and bring down the business rates burden in order to avoid unnecessary job losses and shop closures.”