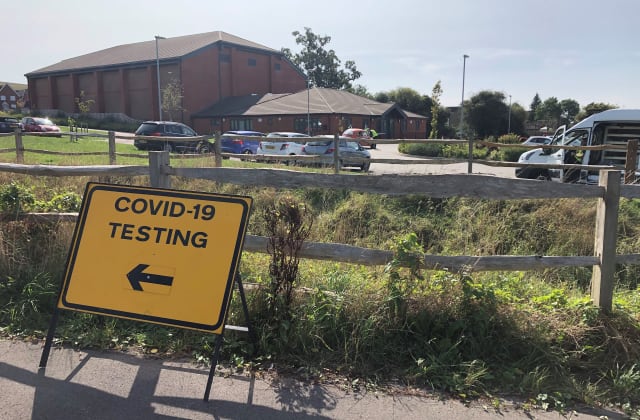 A coronavirus testing site has "disappeared overnight" to make way for a Brexit lorry park, leaving residents confused about where to get tested.

The Tipner drive-through centre in Portsmouth, which is owned by Deloitte, was due to become a lorry site on October 5, but was moved to Southampton Airport ahead of schedule and without warning.

Portsmouth City Council's cabinet member for health Matthew Winnington said he had "no clue" the site would move early, and Portsmouth South MP Stephen Morgan said ministers need to "get a grip over the testing fiasco".

Writing on Twitter, the Labour MP said: "The Government must work with councils and public services to bring down Covid cases and save lives. Shocked to learn @portsmouthtoday and our LRF was only told unofficially last night that the Tipner site has packed up and closed.

"Ministers must get a grip over the testing fiasco."

Government must work with councils and public services to bring down Covid cases and save lives. Shocked to learn @portsmouthtoday and our LRF was only told unofficially last night that the Tipner site has packed up and closed. Ministers must get a grip over the testing fiasco

Mr Winnington said: "Matt Hancock has to take responsibility for this, especially as he's a former minister for Portsmouth so should know the importance of ensuring Portsmouth and the surrounding area is kept in the loop when things like this happen."

"The DHSC (Department of Health and Social Care) needs to get a grip," he added.

Although the Department of Health said the site moved "more than a week ago", the Liberal Democrat councillor said it happened suddenly on Wednesday – a view shared by Portsmouth residents.

Mr Winnington said: "It didn't go a week ago, it was around Wednesday evening. It almost seems the DHSC didn't know when it moved and that's even more concerning.

"We didn't have a clue it would be moving earlier than planned. We have absolutely no idea why we weren't informed.

"It makes me feel ridiculous because people are then saying to me, 'this test site has moved, do you know about that?' and I have to tell them I didn't know."

He added the Department of Health has failed to communicate properly with Portsmouth City Council about other major public health changes, including an ongoing problem over guidance about where Isle of Wight residents should get tested.

"We have got people from the Isle of Wight coming to the mainland for testing, because they are being told they should do that by the DHSC," he said.

"They shouldn't be using public transport while they have symptoms, but what the Government website is saying is that they have to.

"It's just not good enough, and it really gives me concern about what other things we haven't heard about with regards to the pandemic.

Local councils, local resilience forums and some emergency services staff are responsible for co-ordinating local testing centres along with the Department of Health.

Mr Baker said: "Test and Trace has become trace the test. This dereliction of duty is quite incredible.

"What are the public and workers supposed to do if the Government doesn't even know how long a testing site will be available for?"

A Department of Health spokesperson said: "Regional testing sites were set up at great speed to provide access to tests for key workers across the UK.

"Sites were selected where there was immediate availability, as well as being secure and easily accessible.

"To make sure the regional testing site network remains available for as long as is needed, a small number of sites are being relocated.

"The Portsmouth Tipner Lorry Park site has been successfully relocated to the Long Stay Car Park at Southampton Airport to ensure that tests continue to be available in the region."

Deloitte has also been contacted about the site move.