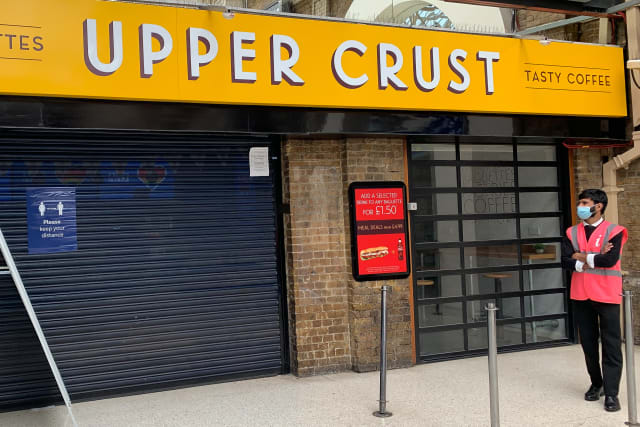 Upper Crust and Caffe Ritazza owner SSP has said nearly two-thirds of its sites still remain closed as it revealed a sales hit of around £1.3 billion due to the pandemic.

The group said it has reopened around 1,100 outlets since lockdown, which decimated trading at its food and drinks sites in airports and railway stations as passengers numbers plunged.

SSP said sales are set to plummet by around 86% in its second half to September 30, with revenues down about £1.3 billion, while operating losses will be in the middle of its predicted £180 million to £250 million range.

The group recently warned that up to around 5,000 jobs are under threat – more than half of its 9,000-strong peak season workforce – as it looks to slash costs in response to the pandemic.

It had warned that only around a fifth of its sites in the UK would open by the autumn, but it has been able to reopen more sites as sales have improved slightly since full lockdown restrictions eased.

A slight improvement in passenger demand has seen weekly sales declines narrow to around 76% from 95% in its third quarter, it said.

In the UK, it said there had been a small recovery in air travel, although it was held back by ever-changing quarantine restrictions, while rail travel remained very weak with a slow recovery as workers tentatively returned to offices.

The latest restrictions brought in on Tuesday by the Prime Minister, including instructions for office staff to work from home where they can, are likely to deal another blow.

SSP cautioned that demand “may well remain subdued” over the winter months.

Simon Smith, chief executive of SSP Group, said: “We have seen some improvement in passenger demand since the start of the crisis and we have reopened units swiftly and profitably in response to this, with over one-third of our units now trading.

“Our model is flexible and we will continue to align unit openings with demand, meeting the needs of our customers whilst managing operating costs and cash flow tightly.

“In the medium term we expect to see the gradual return of passenger travel to more normalised levels.

“The actions we are taking to rebuild the business will enable us to emerge fitter and stronger.”