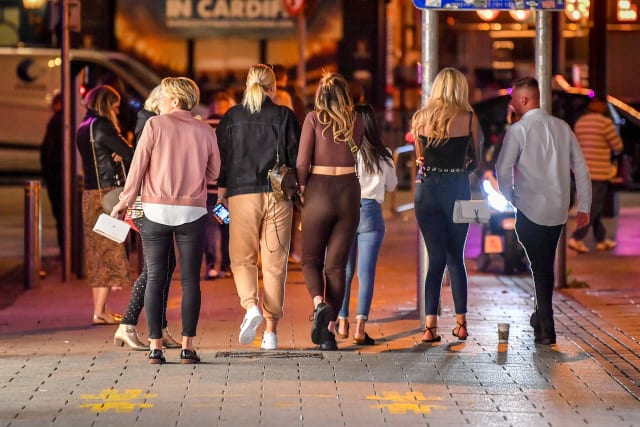 Hospitality businesses in Wales will be able to remain open past 10pm to allow people “to drink up, to eat up, to bring their evening to an orderly close” but must stop selling alcohol after that time.

The Welsh Government announced on Tuesday that pubs, cafes, restaurants and casinos would have to close at 10pm but this was clarified by First Minister Mark Drakeford on Wednesday.

Mr Drakeford told the Welsh Parliament that such premises would have to offer table service only from 6pm on Thursday and to stop selling alcohol at 10pm each night.

But he said they would not be required to close immediately at this time, following representations from those in the industry on Tuesday evening.

Some restaurants in Wales have a business model where they have one sitting at 7pm, a break for cleaning, and then a second sitting who arrive between 8.30pm and 9pm, Mr Drakeford said.

In England, Prime Minister Boris Johnson has said hospitality businesses must close at 10pm – rather than just calling for last orders – to help police enforce the rule.

Two people with coronavirus died, bringing the total number of such deaths in Wales to 1,605.

“We could have had an approach in Wales where, at 10pm, all those people were required to leave and stand on the pavement,” Mr Drakeford told the Senedd.

“I think that would have caused real damage to the business model that people have worked so hard to put in place.

“And every time we make these decisions, we are balancing the needs of people in business and in employment with the need to protect public health.

“I think the sector is very used to not allowing people to act irresponsibly in the few minutes leading up to a 10pm closure.

“Our system will allow people to drink up, to eat up, to bring their evening to an orderly close and then make their way home.

“That is the way the vast majority of people who go out for an evening here in Wales behave already.

“I didn’t want to make their lives more difficult, while we continue to bear down on that minority of people in Wales who have, as the evening gets later, found themselves consuming alcohol to an extent that they can no longer remember where they have been or who they have met with, and who in the process cause a wholly disproportionate impact on others.”

Off-licences including supermarkets will also be stopped from selling alcohol from 10pm each night, with that restriction also coming into force from 6pm on Thursday.

Mr Drakeford appealed to people in Wales to avoid non-essential journeys but confirmed this was advice only and not a return to previous “stay local” restrictions.

He said this did not mean stopping shopping, visiting hospitality businesses or going on holiday and later added that there was no evidence that tourists had caused “spikes of infections” in Wales.

“Indeed, the coronavirus continues to be at its lowest ebb in those places that tourists most often visit,” Mr Drakeford said.

Mr Drakeford told the Senedd that he had asked Mr Johnson to “echo a message” about people thinking carefully about journeys but the Prime Minister “wasn’t willing to do it”.

“All I’m asking people in Wales to do is to think carefully about journeys that they may make,” he said.

“If it’s possible, for example, to visit a restaurant or to go to a pub close to home, that is more advisable than travelling a distance to do the same thing further away.”

In a statement, the Welsh Independent Restaurant Collective described Mr Drakeford’s comments on avoiding non-essential travel as “the final nail in the coffin” for hospitality businesses.

The body, representing more than 300 businesses, said there was “simply no way the industry can survive” if the advice meant people should not visit hospitality venues outside their immediate area.

“The First Minister must clarify that this was not his intention and draw attention to the fact that the vast majority of hospitality venues are safe to visit and should continue to be supported,” it said.

Mr Drakeford also announced that a £500 payment would be provided to support people on low incomes who are asked to self-isolate.