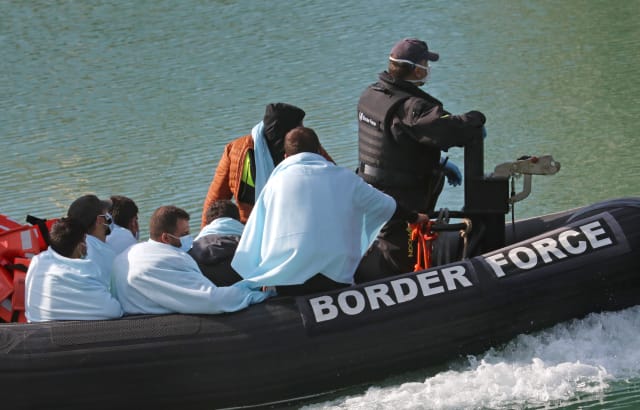 France is trying to stop people crossing the Channel in dangerous small boat crossings because it is trying to “save lives”, a Calais MP has said.

French National Assembly member Pierre-Henri Dumont denied claims that its coastguard is pushing asylum seekers out to the British coast on purpose.

He said French police officers are trying to stop them from making the night-time crossings, telling France 24: “We try in France to prevent this crossing because first we need to save lives.”

He was speaking after a wave of people took advantage of calm seas in the Channel, with hundreds intercepted as they headed towards Britain on Tuesday.

At least 393 migrants made the crossing aboard 26 boats, the Home Office confirmed.

Mr Dumont, who said it is “quite impossible” to monitor all the potential night crossings, told the programme: “It is a riskier way to try and cross the Channel, but it is also the most successful way to cross the Channel.

“We have got 80 per cent success rate for this crossing at night, on very small boats which are overcrowded.”

Those attempting the journey are taking “huge risks” but they do not need to reach the coastline, but to get far enough to cross into the UK’s continental waters.

He added: “They just need to cross 15km and then they see on their cellphones they have a British network, so they ask for help at that time.”

He said that as long as they are in British waters, the French authorities cannot go to help them.

The number who have made it to the UK in September now stands at least 1,880 people, according to analysis by the PA news agency.

This is roughly the same number believed to have crossed in the whole of 2019 and a pledge by Home Secretary Priti Patel to make the route “unviable” is in “tatters”, according to a charity.

He said: “We discussed how best the UK and France can use new tactics and operational activity to stop the boats leaving French shores in the first place.”

Even with extra resources deployed to the Dover Strait, Border Force was busy for more than 13 hours dealing with crossings along more than 65 miles of coastline.

Dozens of people thought to be migrants were seen arriving in Dover harbour wrapped in blankets and wearing lifejackets.

They included children, including one in a pink jacket who was too young to walk.

Many had to queue before they were allowed to disembark from Border Force boats because of the volume of arrivals.

In France, authorities rescued at least 88 people trying to cross to the UK.

Patrol vessels were busy for more than 14 hours as several boats carrying migrants were intercepted off the coast.

Bella Sankey, director of humanitarian charity Detention Action, said: “Priti Patel’s claim she would make Channel crossings unviable lies in tatters as this has been the busiest month on record.

“This dangerous situation is not sustainable but desperate refugees will continue to risk their lives as long as the Government refuses to offer safe passage to the UK for those fleeing persecution.

“Unless the Home Secretary changes tack she will look neither tough nor compassionate and will please no one.”