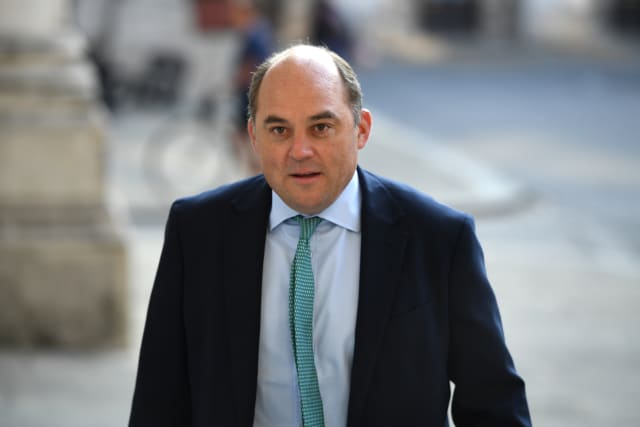 The Defence Secretary has claimed “illegal wars” instigated by Labour contributed to the legal “mess” faced by British troops.

Mr Healey added the Government is bringing in a “legal presumption against prosecution for torture, war crimes, for crimes against humanity”.

He told the Commons: “This is the Government of Great Britain saying sexual crimes are so serious they’ll be excluded from this presumption, but placing crimes outlawed by the Geneva Convention on a less serious (level) and downgrading our unequivocal commitment for upholding international law that we in Britain ourselves after the Second World War helped to establish.”

His comments were branded “embarrassing” by veterans minister Johnny Mercer sitting on the frontbench.

Mr Wallace then intervened, stating: “What is appalling is the straw man being put up time and time again by a Labour Party half-funded by these ambulance-chasing lawyers that is going to damage our reputation. No apology of the money they took from a number of them, no apology whatsoever…

“Much of the mess we are having to come and clean up today is because of your illegal wars, your events in the past … and to put up straw men and make wild allegations that are wholly inaccurate and disputed by much more learned people than him, I think it a dis-service to our troops and is all about making an excuse for not supporting this Bill.”

Afghanistan and Iraq were the major military campaigns in which Tony Blair sent British troops into combat.

The latter proved particularly controversial, especially in relation to the level of threat actually posed by Iraq’s weapons programme.

The Government believes the new legislation will ensure service personnel will be protected from “vexatious claims and endless investigations”.

It seeks to limit false and historical allegations arising from overseas operations by introducing a statutory presumption against prosecution, making it exceptional for personnel to be prosecuted five years or more after an incident.

But campaigners and some senior military figures have warned that the legislation will create a presumption against prosecution of torture and other serious crimes, except rape and sexual violence.

He told the Commons: “We’ve been told that this Bill is controversial. Some have gone as far to have said it decriminalises torture or prevents veterans from receiving compensation.

“Both allegations are untrue. I have to question if those making those points have actually read the Bill in full.”

Mr Wallace added: “We want in the future the ability if necessary to allow soldiers to focus on the danger and job in hand when in operations, not on whether they will have a lawsuit slapped on them when they get home.”

But Mr Healey suggested the Bill is more about protecting the Ministry of Defence (MoD) than protecting British troops.

He also said the Bill denies troops who serve overseas the same employer liability rights as the UK civilians they defend, adding Labour wants to make changes to the proposals.

Mr Healey told the Commons: “Over the last 15 years, there have been 25 cases brought by injured British troops against the MoD for every one case brought by alleged victims against our troops.

He went on: “This legislation will have no impact on any past or any continuing cases … it offers no hope and no help of faster resolution either for troops or alleged victims who may still be involved in long-running litigation or in repeat investigations.”