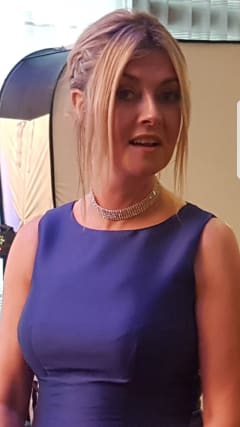 A mother killed instantly in the Manchester Arena attack became a “guardian angel” to her daughter who “amazingly” survived, an inquiry into the bombing has heard.

Company secretary Michelle Kiss, 45, was “just being a mum” as she waited in the foyer on the evening of May 22 2017 to collect her youngest child after an Ariana Grande concert, said husband Tony.

He said his wife had visited the venue “many times” with their three children to watch various concerts and events, including her favourite band Take That on six occasions.

He said: “How sad to think that a place that brought so much joy to our family would be the place forever to take away that joy.

“On that fateful night Michelle was just waiting for our daughter. She was just being a mum. Michelle died but somehow my daughter survived amazingly and so, so thankfully she was physically unscathed. However, the horrors that she must have witnessed in the aftermath of the explosion are fully known only to herself.

“I like to believe though that in their last moments together she brought some comfort to her mum. I also like to think of her at the moment of their parting as her mum’s little guardian angel because I know that Michelle became her guardian angel in that same very moment.”

His tribute – read by close family friend Mark Dickson – told of how the couple from Whalley, Lancashire, became childhood sweethearts and later “soul mates” as they married on the beach in Barbados in 1995 and went on to have three children, Dylan, 23, Elliott, 20, and their daughter in 2004.

He said: “It seemed from the moment we met to the moment my children were born that we had been building the edges of our family picture. Now our family was complete.

“We knew we had an exciting lifetime ahead of us all and we wanted to fill it with so many more beautiful memories. We were all so happy.”

Her sudden death had left “an emptiness”, he said.

“I will always try to ensure that our children seize the opportunities that life offers just like their mother did. Michelle Kiss. Just saying her name breaks my heart because I know so many beautiful moments from our futures have been taken away from us all.

“The bomb didn’t just destroy the lives of 22 people in the arena that night, it changed the lives of every family member that lost a loved one. They know what I mean.

“It damaged those who were injured and their families and many more people present, and not present, on the night who were also affected so deeply.”

He continued: “I take great comfort knowing that my beautiful Michelle’s broken body was taken from the arena so respectfully and I know she travelled at funeral pace to the morgue. This was a beautiful and important act of love and respect for her and I appreciate that so much, I always will.

“These moments of love and respect were magnified somehow in the following days by the coming together of the people of Manchester in the way they did and in the way they do. They demonstrated in the most incredible way that choosing love can be the more powerful force. For this, I say thank you to the wonderful Manchester people for restoring my faith in humanity during the hardest time of my life.”

The commemorative part of the hearings will conclude this week. The public inquiry, chaired by Sir John Saunders, is to examine the background to the attack by suicide bomber Salman Abedi and the response of the emergency services and will conclude next spring.