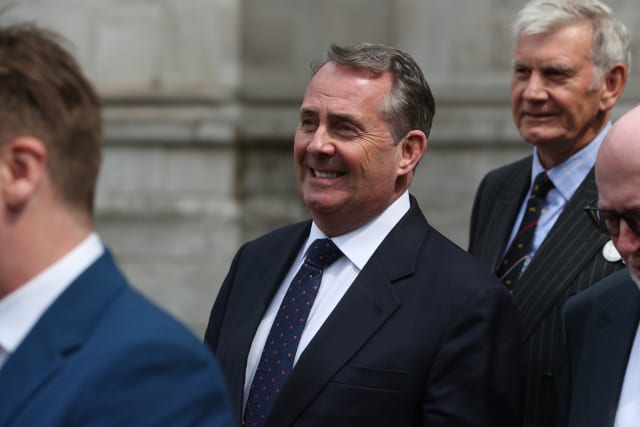 UK World Trade Organisation nominee Liam Fox is hoping to snare further European Union votes as the bloc showed signs of a split over who should be the next director general.

The ex-international trade secretary successfully navigated the first round of voting last week as the list for the trade body top job was whittled down from eight to five.

According to reports, the EU – currently embroiled in tense trade negotiations with the UK – had voted as a bloc during the first round to prevent Dr Fox’s progression.

But on Sunday, Hungary became the first member state to break ranks, confirming it would be voting for Dr Fox in round two.

In a statement on Facebook, Hungarian foreign affairs minister Peter Szijjarto said his administration, following a phone call with Prime Minister Boris Johnson on Friday, would be supporting the candidacies of both Dr Fox and former Kenyan foreign minister Amina Mohamed.

Dr Fox is now touting for further European support as he looks to replace Brazil’s Roberto Azevedo, who made a surprise announcement in May that he would step down as WTO chief a year early.

In a briefing with reporters on Monday, the senior Conservative confirmed he had visited France, Germany and Poland, as well as Hungary’s capital Budapest, in the run-up to the first round and that he hoped for further European backing in the next.

The North Somerset MP, an ardent supporter of the UK’s exit from the EU, was sacked from the Cabinet by Mr Johnson on his arrival in Downing Street last year but was handed the UK’s WTO nomination in July.

The Scot set out his reform agenda for the organisation during the briefing, including policies which include speeding up how long it takes for the WTO to rule on trade disputes between its 164 members while also broaching the possibility of reforming the “slightly opaque” way of electing its director general.

The current process sees three rounds of “confessions”, with a five-person panel holding individual meetings with the permanent representatives of each member where the officials rank the candidates in order each time.

The behind-closed-doors system takes close to three months to complete, with campaigning kicking off in August and a winner not expected to be confirmed until early November.

Answering a question from the PA news agency, Dr Fox said: “Would it be nice to have a quicker system? Yes.

“Is it possible to guarantee it can be reformed? No, it’s not. But would it be a useful conversation to be having over the next four years? Undoubtedly.”

Former director general Mr Azevedo’s seven-year tenure was marked by intense pressure from US President Donald Trump, who repeatedly accused the WTO of “unfair” treatment of the US and started a trade war with China in defiance of the WTO system.

Dr Fox stressed that any rule changes would require “consensus” but said he thought the “speed at which judgments and dispute resolution is arrived at” needed to be quicker in a bid to make the organisation more agile.

He said: “We’ve had cases taking years to resolve, which cannot be in the spirit of the organisation.”

As well as Dr Fox and Ms Mohamed, the other three contestants in the race are Ngozi Okonjo-Iweala, an ex-finance minister in Nigeria who spent 25 years at the World Bank; Yoo Myung-hee of South Korea, a minister for trade, and Mohammad Maziad Al-Tuwaijri, a Saudi former economy minister and longtime banker.