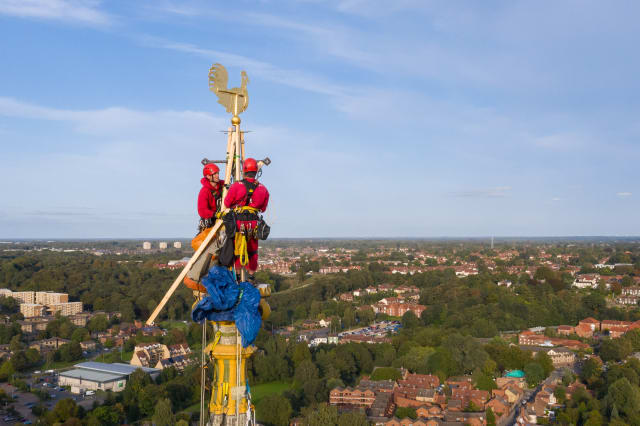 A golden weathercock that has perched atop a cathedral’s spire since the 18th century has been returned to its lofty position after it was brought down to be re-gilded.

Conservationists Chris Milford, 72, and his son Sam scaled the 315ft-tall spire of Norwich Cathedral with a system of ropes to reach the cockerel-shaped wind vane last month.

They returned it to the cathedral’s highest point on Thursday, after it was covered with a thin coating of gold.

The spire is the second tallest in the country after Salisbury Cathedral.

The current project is thought to be the first time since 1963 that the weathercock has been brought down to ground level.

The 2ft 9ins (83cm) weathercock has crowned the cathedral spire since at least 1756 when the top part of the spire was rebuilt.

It is the cathedral’s third documented spire.

The next spire was burnt in a fire in 1463 caused by lightning.

The current spire, constructed of a brick cone with stone facing, was thought to have been designed by Robert Everard and built later in the 15th century.

Records suggest it may have been completed in 1485.