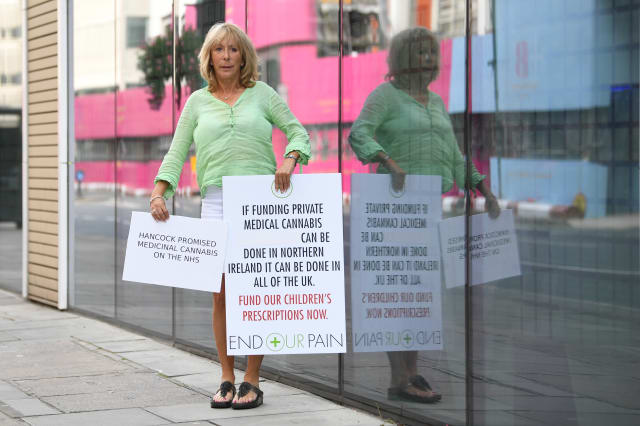 The mother of a severely epileptic daughter is urging better access to medical cannabis after holding a vigil at the Department of Health and Social Care in an attempt to speak with Health Secretary Matt Hancock about the issue.

Elaine Levy, from north-west London, said her daughter Fallon had “no quality of life whatsoever” before she began using full extract cannabis oil, which dramatically reduced the number of her seizures.

Spending £2,200 per month on private prescriptions, Ms Levy said she had to sell her family home to pay for the treatment.

She is one of five parents who held a vigil at health authority buildings in England, Scotland and Wales on Wednesday, in protest against being denied NHS prescriptions despite medical cannabis being legalised in 2018.

“I’m not saying it was a cure, because she still has episodes, but she actually has life now. It’s remarkable,” Ms Levy told the PA news agency.

“And I wouldn’t be sitting in his (Matt Hancock) building now asking to see him because I can’t sleep at night. I don’t know how much longer I can continue on.”

Ms Levy said that she held the one-woman vigil in attempt to speak with the Health Secretary, who she said met with the campaign group in Westminster some two years ago.

“Matt Hancock said that he would do everything to help and he also said to me that if the neurologist wants to prescribe it, they should be able to,” she told PA.

“My head neurologist has tried to get it for me and he’s just been turned down, time and time again.

“So I’ve come here today because I’ve got nowhere else to go. I’ve tried all the routes.”

Doctors can legally prescribe medicinal cannabis, but have been reluctant to do so – citing a lack of clear guidance on prescribing and issues over funding.

Alfie Dingley was the first person in the UK to receive a permanent medical cannabis licence and went on to be granted the first NHS prescription issued after the UK law change.

The Department of Health and Social Care (DHSC) has been contacted for comment.