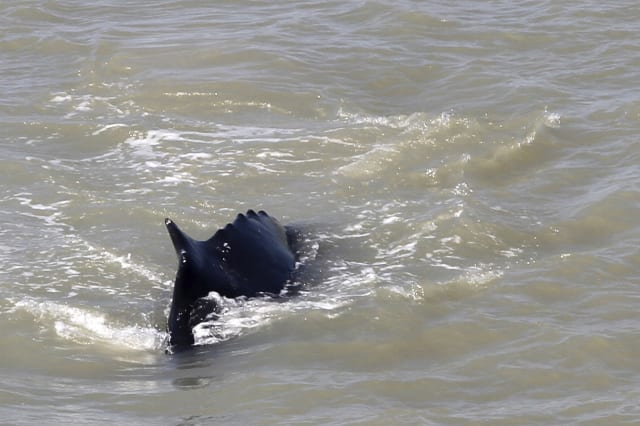 SYDNEY (Reuters) - Australia's northern tropical rivers are renowned for being crocodile-infested, so the appearance of migrating humpback whales in one waterway has baffled marine scientists, who assume they simply took a wrong turn and got stuck.

Marine ecologist Jason Fowler discovered three whales on a fishing trip with friends two weeks ago. He and five friends were sailing in the East Alligator River, some 26 kms (16 miles) inland in Kakadu National Park in the country's remote north, when he saw a plume of water from the muddy river.

"I called out to my crewmates, 'dolphin!', but at the back of my mind I was thinking, 'that's not a dolphin, that's huge'," Fowler said.

"I knew they were humpbacks (but) I could not convince myself it was actually a whale so far up a tropical muddy river that was full of crocodiles."

Humpbacks like to be in open sea at least 30 metres (10 feet) deep, but they appeared stuck in a 15-metre "hole" in a river that was otherwise 5-6 metres, Fowler said, adding it was the first known case of whales in the tropical inland habitat.

In a Facebook post, Parks Australia said it appeared some of the whales had since made their way out of the river and just one was left. It had put an exclusion zone around the area as experts decided whether to intervene.

"The last thing we want is a collision between a boat and whale in waters where crocodiles are prevalent and visibility underwater is zero," the post said.

Fowler thought it unlikely the whales would be attacked by crocodiles due to their size.

"We would hope they would find their way out to sea again but you don't really know what's going to happen in this situation," he said.

"The big question in my mind is: what happens at night? What happens when they want to rest and take it easy knowing that they're flanked by these big crocodiles?"