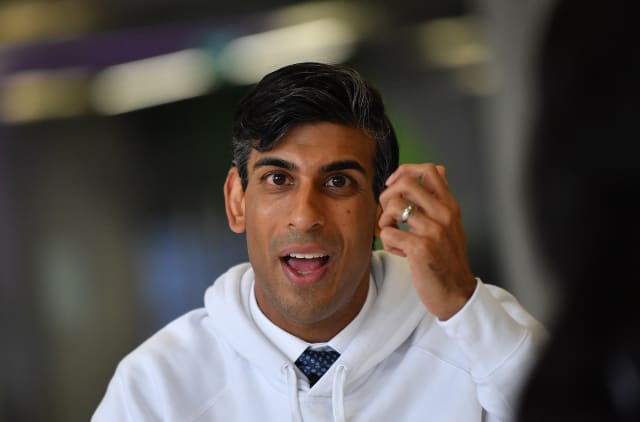 Rishi Sunak has insisted he will continue to act in “creative and effective ways” to protect jobs, amid calls for a targeted extension of the furlough scheme.

The Chancellor was pressed by Mel Stride, Tory chairman of the Treasury Select Committee, to build on his “tremendous work” by developing further support after October.

Speaking in the Commons, Mr Stride said: “Would he agree with me that there will be many thousands, perhaps even hundreds of thousands of jobs, which are going to be viable after Covid is dealt with, but will not make it unless they are provided with further targeted support after the end of October?”

Mr Sunak replied: “Well, as ever I’m grateful for the advice from (Mr Stride).

“He is right that businesses do need support which is why many of the interventions we have put in place last through to next year – for example the business rates holidays and indeed our support for the economy and jobs through initiatives like our stamp duty cut to catalyse the housing market.

“But I hope he will be reassured that throughout this crisis I’ve not hesitated to act in creative and effective ways to support jobs and employment and will continue to do so.”

For Labour, shadow Treasury minister Bridget Phillipson said: “Despite countless warnings from these benches the Government is pulling away the Job Retention Scheme just at the moment when infection rates are rising again right across our country.”

She added: “Will the minister not listen and change course before it is too late?”

Treasury minister Stephen Barclay replied: “(Ms Phillipson) is just simply wrong because what she ignores is the fact that (Mr Sunak) has put in place a furlough bonus as support that goes beyond October to retain that link for employees to come back.”

Ms Phillipson said: “Rather than stubbornly sticking to a decision made back in July, can the Chief Secretary not accept that the situation has changed and the Government must too change course?”

Mr Barclay replied: “The reality is that the furlough pays a higher rate of people’s wages than Spain, it supports a wider range of businesses than New Zealand and the scheme runs for twice as long as that in Denmark.”

Meg Hillier, Labour chair of the Public Accounts Committee, also asked: “Will the Chancellor go back to the drawing board and look at the issue here of the cost to our country of not supporting people who have a good track record with HMRC who could be supported and who have lived on fresh air for all of these months?”

Mr Sunak said: “I hear what (she) says and we’ll certainly reflect on it.”

Shadow chancellor Anneliese Dodds addressed statutory sick pay and said the amount available to workers is “not enough to live on”.

She said: “Rumour has it the Chancellor is blocking attempts to improve sick pay.

“So I put it to him: can he put himself in the shoes of those low-paid workers who often have to choose between paying the rent and the bills or putting food onto the table for their kids?

“If these workers are advised to self-isolate, if they’re even eligible for statutory sick pay, they get £95.85 a week. Surely the Chancellor must agree with (Health Secretary Matt Hancock) that statutory sick pay is not enough to live on?”

Mr Sunak responded: “From the beginning of this pandemic we have made changes to the operation of statutory sick pay and indeed our welfare system to ensure that those who were isolating in any circumstance received support from day one.”

Ms Dodds also asked Mr Sunak to “rule out” early tax rises for the rest of 2020, with Mr Sunak addressing different parts of her question rather than this specific part.

In a statement after Treasury questions, Ms Dodds said: “The Chancellor was asked a simple yes or no question about whether he would rule out announcing new tax rises this year – and he failed to answer it.

“It only fuels speculation that he wants to hike taxes now just so he can cut them before the next election. He’s playing politics with people’s jobs and livelihoods.”