Greedy Labrador rushed to hospital after eating his entire lead 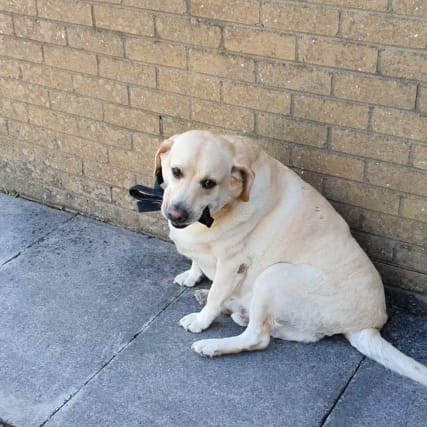 A greedy Labrador was rushed to hospital after scoffing his entire lead while his owners were not watching.

Max the hungry hound made short work of the lead during a 15-minute car journey, leaving nothing but the metal end.

Owners Brian and Christine Hillman took him to the emergency Vets Now clinic in Newport for urgent treatment.

A team of specialists worked quickly to recover the lead, which had been chewed into neat 5cm strips.

Ms Hillman, 54, said that although Max was prone to chewing on items of clothing he had never before eaten anything he should not have.

“We lost our lovely pet Sadie in 2013 and I vowed I’d never get another dog,” she said.

“But I couldn’t resist Max when we saw him at nine months old and he helped to fill the gap. So much so, we soon got another lab – Saffron, who is six.

“They’re both lovely but we know to keep an eye on Max as he is prone to getting hold of things and having a good chew.

“He is always at the socks and knickers from the washing, although he just bites holes in them, he’s never actually eaten any.

“So, we never for a moment thought he’d do anything as crazy as eat his lead.”

Seven-year-old Max has had previous health issues and was on his way to a hydrotherapy session before Mr Hillman spotted the missing lead and made a swift diversion to the hospital.

“It’s only about a 15-minute journey but when Brian went to get him out, all that was left was the metal end of the lead,” said Ms Hillman.

“He checked the car and the car park just in case but there was no trace so it was obvious he’d started chewing on it and then just ate the whole thing.”

The Vets Now clinic in Newport, which is open 24 hours a day, seven days a week, deals with all sorts of pet emergencies, though the team says this is the first dog they have treated who has ingested an entire lead.

“Some foreign objects are small enough to pass through a dog’s system without causing any problems but others can get stuck causing dogs to become seriously ill quite quickly.

“These intestinal obstructions often require surgery which poses its own risks.

“However, in Max’s case, because we knew he’d only recently swallowed the lead we were confident inducing vomiting would bring it back up.

“His case just goes to show some dogs, particularly labs, will eat almost anything.”

Ms Hillman said that although Max was initially a bit queasy when he returned home, he has since returned to his old self.

“The Vets Now team were brilliant, so caring and nice,” she said.

“Max was a bit queasy when we got him home and it took three of us to get him out of the car, but, thankfully he was soon back to his old self.

“It’s still hard to believe what he did. We take no chances now and have both dogs off their leads when they get in the car.”