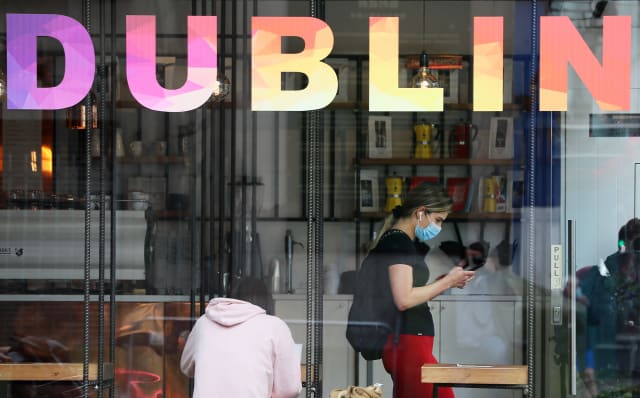 Closed Dublin pubs will not be able to reopen along with those in the rest of Ireland as part of tailored restrictions to tackle spiralling infection rates in the city.

While Dublin city and county has been given the same ‘Level 2’ status as the rest of the country under the Government’s new Covid-19 threat classification system, they will be subject to some additional limitations.

Relaxations on people attending sporting events, which allow for crowds of up to 200 at larger stadiums, will also not apply to Dublin.

Level 2 allows people to participate in gatherings at home and outside of six people from no more than three other households.

Those in Dublin should keep those gatherings limited to people from just one extra household.

People living in and around the capital have also been encouraged to limit travel outside the area and, if they do travel, only meet one other household when outside the county.

Pubs serving food were able to open nationwide at the end of June. Those that do not serve food are set to reopen on September 21 but Dublin establishments have now been excluded from that plan.

Ireland’s deputy premier Leo Varadkar, a TD for Dublin West, said he wanted to make a special appeal to the people of his city.

“The situation in our capital is worrying and has deteriorated in the past few weeks,” he said.

“The level of the virus circulating in our city and county has increased more than tenfold in the past two months.

“The positivity ratio is around 3.5% against around 2% in the rest of the country.

“If this continues, it may not be possible to keep the virus out of our hospitals, nursing homes and factories no matter how hard we try.

In an apparent reference to the exploits of Dublin’s multiple all-Ireland winning gaelic football team, Mr Varadkar added: “This is September – the month in which Dublin usually shows the country what we’re made of.

“And that’s what we have to do now. We can flatten the curve in Dublin again and, in doing so, protect the rest of Ireland from its spread.”

Taoiseach Micheal Martin was asked why Dublin was not classified at Level 3, rather than Level 2 with additional restrictions.

He said moving to Level 3 was a significant step and would result in major limitations on citizens.

Mr Martin said the numbers related to the virus in Dublin were “going in the wrong direction”.

“We’re very concerned about it,” he said.

“And that’s why we’re appealing to people in terms of their personal behaviour, in terms of household gatherings to keep them to the absolute minimum, reduce your contacts and adhere to the public health guidance in order to try and avoid getting to a Level 3 situation, which is very significant and has a very significant impact on people’s needs.”

The specific measures for Dublin were agreed by Cabinet on the back of advice of experts in the National Public Health Emergency Team.

“This isn’t about Dublin versus anywhere else,” he said.

“We’re all watching what’s going on in Dublin, the people of Dublin understand that the situation is escalating very, very quickly and people in Dublin, I think, welcome the public health doctors providing this advice.”