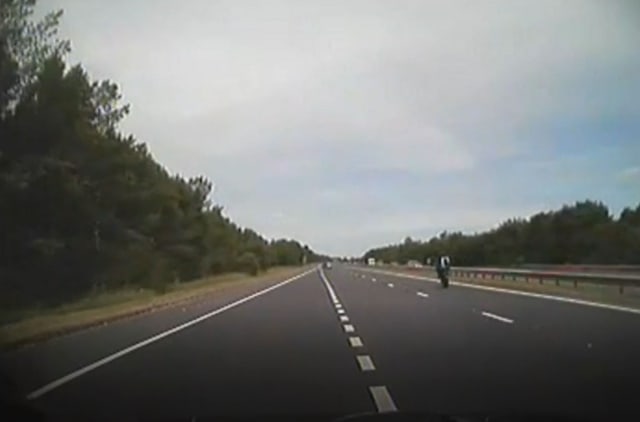 A biker who pulled a 100mph wheelie on a motorway while passing an unmarked police car has admitted dangerous driving.

A video camera on the front of the Northumbria Police vehicle showed Lee Embleton, 51, hurtle past just as the officers were joining the A194(M) at Follingsby Lane in Gateshead.

Analysis showed the first of three bikes – the one ridden by Embleton – was travelling at more than 100mph.

He was given an interim driving ban and has forfeited his bike following the offence in June 2018.

He will be sentenced at the same court on November 13.

Chief Inspector Sam Rennison, of Northumbria Police, said: "We deal with dangerous driving cases on a regular basis but it beggars belief that somebody would act so stupidly and dangerously on the roads.

"The overwhelming majority of motorbike riders use the roads in a safe manner and respect their own safety as well as other motorists, but Embleton did not and must now deal with the consequences of his actions.

"Unfortunately for Embleton, he decided to carry out the ridiculous stunt right in front of an unmarked police car – and our officers were able to quickly stop him and report him for the offences."