‘She knows how to bake’: Kate impresses as she and William have a bash at bagels 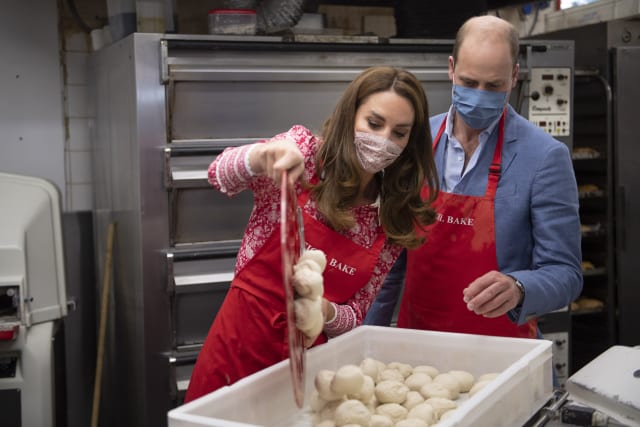 The Duchess of Cambridge looks like she may have perfected her baking skills during the lockdown after giving a masterclass in preparing bagels.

Kate and William got stuck in when they visited east London’s Beigel Bake Brick Lane Bakery to learn what has made the famous institution popular for more than 40 years.

Fiona McVeagh, 64, who has worked at the eatery for 33 years, said: “They are pretty good, especially her – she clearly knows how to bake.”

The 24-hour bakery has become the staple of clubbers, shift workers and tourists drawn to its renowned salt beef bagels, which give a taste of the food once popular with the East End’s former Jewish community – now largely replaced by Bengali Muslim residents.

The couple visited the East End to see how communities and businesses have been coping during the Covid-19 outbreak and to celebrate the area.

At the nearby East London Mosque and London Muslim Centre, the royals met staff, volunteers and local business leaders who helped provide food parcels to Muslim worshippers, Christians and those of no faith.

And they began their day by visiting the London Bridge Jobcentre, where they heard how some employers are using the coronavirus pandemic as an “excuse” to shed staff.

Wearing masks, aprons and gloves after sanitising their hands, the couple were given rough cuts of dough weighing more than 7lbs and Kate quickly kneaded hers into a round ball while William spent longer creating the right shape.

Each ball makes around 30 bagels and, after being complimented on her technique, Kate, who wore a Beulah dress and tan heels, laughed and said: “Just wait until you see the aftermath. I had beginner’s luck, they are getting worse!”

They carefully placed their dough balls into trays ready for the next stage in the process – being fashioned into smaller sizes – and Ms McVeagh joked “you’re after my job!”

When the couple first arrived, Amnon Cohen, 70, one of the co-founders, who started the bakery with his late brother, Asher Cohen, said: “We’ve been here 41 years, thank you for coming.”

William was introduced to Ms McVeagh and other workers, and said “We’ve heard there are very famous bagels in here”, and she asked “Have you ever had one?” and he replied “No, not here.”

The couple were taken through by Amnon’s son Elias Cohen, 27, to watch the bagels being made from scratch.

Mr Cohen said later: “We had to furlough our staff. Fortunately we were later able to slowly expand our hours again and are now open 24 hours again. It’s steady, we are serving. But it’s not like it was before. It’s definitely quieter.”

Elias said the business had been helped by the fact that they had already started working on a home delivery app and have been working with a food donation programme, Feast, to distribute unsold bagels.

Earlier, the duke and duchess toured the East London Mosque and London Muslim Centre to meet staff, volunteers and local business leaders who helped the community with grocery donations and hot food.

The mosque’s senior imam Mohamed Mahoud brought up the issue of mental health – championed by the couple through their Heads Together campaign – when he spoke to the royals.

The imam, who received an OBE from William last year for services to his community, said later: “I highlighted the issue of people increasingly needing support with their mental health – the Muslim community as well as the rest of the UK, who have been horrifically affected by the pandemic in terms of losing jobs and livelihoods.”

He added that the visit by the royal couple had real importance for east London’s Muslims, saying: “It recognises our existence first of all and contributions we’ve made and the sacrifices and the pains and struggles of people, especially from the BAME (black, Asian and minority ethnic) community.”

During their visit to the London Bridge Jobcentre in south-east London, William and Kate met people whose jobs have been affected by the outbreak on the day new figures revealed that unemployment has risen to its highest level for two years.

Among them was Afef Ben Khaled, who lost her job in a commercial bank in May when her contract was not renewed.

The duchess asked Miss Khaled, who is from France and has been based in London for five years: “Are a lot of your colleagues who were made redundant at the same time as you, are they finding themselves in the same situation?”

She replied: “Another colleague of mine who was made redundant thought they (employer) are using the Covid-19 as an excuse. Sorry to be direct with you, but this is the reality.”