Robin Swann: Claims I was overruled on coronavirus restrictions ‘bogus’ 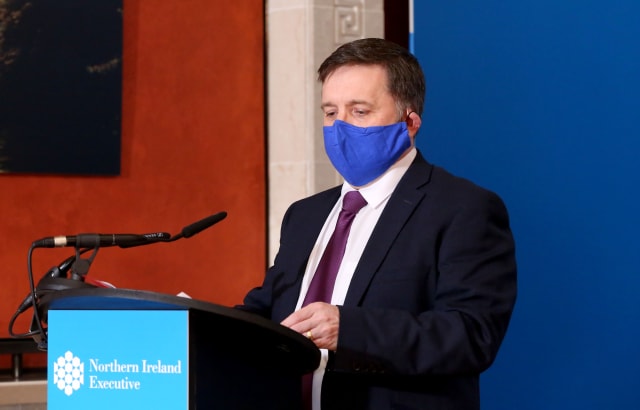 On Thursday, ministers resolved to impose localised limitations on people socialising in Belfast, Ballymena and other areas with high infection rates.

Mr Swann said: “In light to what is being alleged this morning, I am not going to breach the confidentiality of Executive discussions to comment on ill-informed and bogus claims.

“Our public health messaging is too important to play games with.”

Mr Wilson alleged that Mr Swann and others had pressed for more extensive restrictions during Thursday’s Executive meeting.

The East Antrim MP told the BBC’s Good Morning Ulster programme: “If the technocrats in the Department of Health and if some of the ministers in the Executive had had their way these restrictions would be far more severe and many businesses would be experiencing far, far greater difficulties as a result of them.”

The DUP’s chief whip at Westminster added: “Other ministers wanted far, far more widespread restrictions and those were opposed by our party, and quite rightly so.”

Limits on social interaction between households amid soaring Covid-19 infection rates in the Belfast council area were agreed last week.

People living in Ballymena town and postcode areas BT43, BT28 and BT29 have also been given guidance discouraging non-essential journeys outside the affected zones.

There will also be new legally enforceable social restrictions – residents in these areas cannot visit other households.

There are a number of limited exceptions, including childcare provision and households that have formed a social bubble with another.

No more than six people, from no more than two households, are allowed to meet in private gardens.

He said Mr Wilson is undermining the coronavirus message.