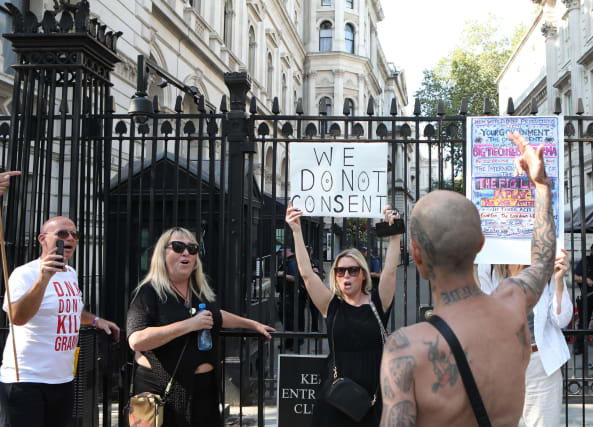 People should report their neighbours to the police if they breach the new “rule of six” coronavirus restrictions, a Home Office minister said.

Policing Minister Kit Malthouse suggested that people should ring the non-emergency 101 number if they have concerns that the laws are being breached.

Any social gathering of more than six people in England is against the law, with people facing fines of up to £3,200 if they do not abide by the new measure, which applies to both indoor and outdoor settings.

Mr Malthouse said if people saw “that kind of thing” they should consider calling the police.

He told BBC Radio 4’s Today programme: “We are in discussions about what reporting mechanisms there might be, but there is obviously the non-emergency number that people can ring and report issues they wish to.”

Pressed on whether that would involve reporting a gathering of seven or more in a neighbour’s garden, Mr Malthouse said: “It is open to neighbours to do exactly that through the non-emergency number, and if they are concerned and they do see that kind of thing, then absolutely they should think about it.”

He told Times Radio he had cancelled his own child’s birthday party to avoid breaking the rules.

“You cannot meet socially in groups of more than six in England and that includes children,” he said.

“While I understand that people will say ‘they are mixing in school anyway’, this is not about eliminating contact, it’s about limiting contact.”

Downing Street suggested the policy was aimed more at “egregious” breaches than smaller gatherings and indicated the police were unlikely to begin issuing fines immediately.

Asked whether people should report their neighbours, the Prime Minister’s official spokesman said: “What we want people to be focused on is following the new rules and ensuring that they, themselves, help again as they have in the past to slow the spread of the virus.

“What you have seen in recent weeks is some egregious flouting of the rules, such as the holding of large illegal parties, and members of the public have been contacting the police about those because they have been concerned about the risk to public health.”

National Police Chiefs’ Council (NPCC) chairman Martin Hewitt denied that enforcement of the rule would rely on people “grassing up” their neighbours.

“I think what it relies on is all of us being responsible,” he told BBC Breakfast.

Regulations enabling the enforcement of the rule – and setting out the exemptions – were published late on Sunday night, around 30 minutes before they came into effect.

People breaking the law will face a £100 fine, doubling for subsequent offences to a maximum £3,200.

But those attending must be part of a “qualifying group” of up to six people and not allowed to join other groups or “otherwise mingle”.

Downing Street said police would be able to use their discretion to decide what constitutes unlawful mingling.

“Police are used to using their discretion in upholding the law and I’m sure that’s what they will do in this case,” the Prime Minister’s spokesman said.

Deputy Assistant Commissioner Matt Twist, who leads the Metropolitan Police’s response to coronavirus, said officers will be deployed in every borough to patrol public spaces and respond swiftly to incidents where groups gather in large numbers.

“Where people just won’t listen, and are putting everyone at risk, we absolutely will take enforcement action,” he said.

A small group of demonstrators mounted a protest against the rule of six outside the gates of Downing Street.

Meanwhile, the impact of coronavirus continued to be felt in Westminster, with Labour leader Sir Keir Starmer self-isolating after a member of his household displayed symptoms.

That meant he missed the chance to take on Boris Johnson in the Commons chamber debate on the Internal Market Bill.