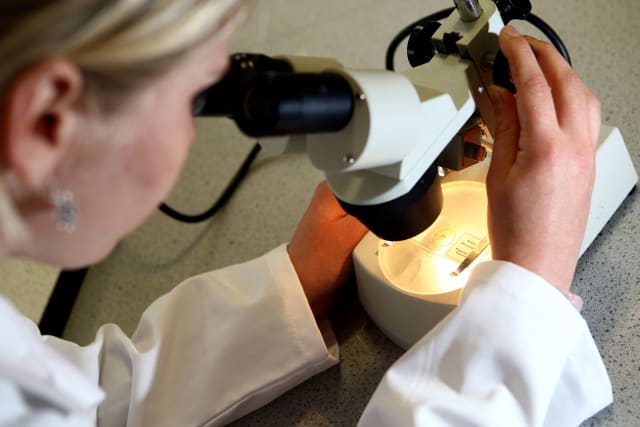 Launching a dual-pronged attack on tumours using a combination of two precision medicines could treat cancer patients whose tumours have stopped responding to existing drugs, a study suggests.

The clinical trial is the first to use genetically targeted drug olaparib – already licensed for ovarian, breast and prostate cancer – together with a new medicine called capivasertib.

Researchers used the drug combination to target two fundamental weaknesses in cancer at the same time.

These were a damaged system for repairing DNA, and what they describe as addiction to a molecule called AKT which fuels tumour growth.

An early-stage trial, led by a team at the Institute of Cancer Research, London (ICR) and the Royal Marsden NHS Foundation Trust, found the drug combination was safe, the researchers said.

It also successfully hit its targets, and was effective against a variety of advanced cancers – including those that had stopped responding to chemotherapy – they added.

Study leader Johann de Bono, professor of experimental cancer medicine at the ICR and consultant medical oncologist at the Royal Marsden NHS Foundation Trust, said: “Our study establishes the potential of a combination of two precision medicines for patients whose tumours have stopped responding to existing drugs.

“The combination of olaparib and capivasertib works by attacking two fundamental weaknesses in cancer, and could potentially be used to treat patients with several common tumours.

“I look forward to seeing the possible benefit of the combination tested in later-stage trials.”

In the phase I trial, researchers gave 64 patients with advanced solid tumours – including those with breast cancer, ovarian cancer and prostate cancers – combinations of olaparib and capivasertib.

Twenty-five of the 56 patients whose responses could be assessed benefited from treatment, with their tumours either shrinking or stopping growing, the study found.

A number of the patients had previously stopped responding to chemotherapy and other targeted treatments as their cancers became drug resistant.

According to the researchers, many of the patients who responded to the treatment had mutations to genes involved in repairing DNA, including to the BRCA genes.

Professor Paul Workman, chief executive of the ICR, said: “It’s very exciting to see two drugs pioneered thanks to the ICR’s research now being used together in patients, with the real possibility that they could offer an urgently needed new treatment option for patients whose cancers have become resistant to current treatments.”

This combination is now planned to move forward into larger-scale trials.

The study is published in the Cancer Discovery journal, and was funded by pharmaceutical company AstraZeneca, under the auspices of the Cancer Research UK Experimental Cancer Medicine Centre Combinations Alliance.