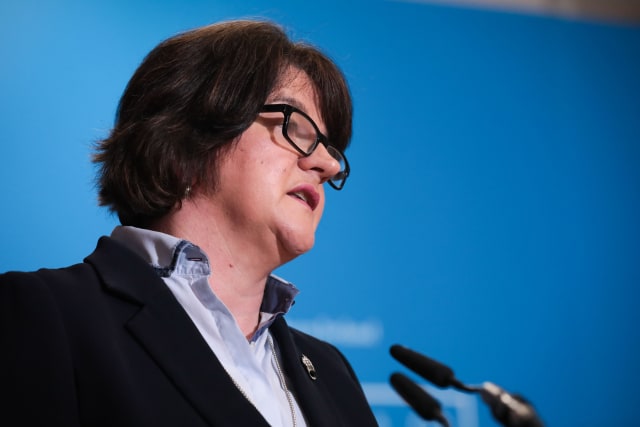 Arlene Foster has urged Stormont political colleagues to “wise up” and end hostile briefings about coronavirus.

Health Minister Robin Swann said he enjoyed the full support of Northern Ireland’s First Minister and Deputy First Minister in a concerted approach to slowing the spread of infection.

Mrs Foster told the Stormont Assembly: “Everybody should wise up.

“We are dealing with huge issues in the Executive.”

She said the country had reached a tipping point in the battle against Covid-19.

“People should stop briefing against each other. We are supposed to be in a five-party coalition dealing with all of these issues and that is what I hope we do moving forward.”

On Thursday, ministers resolved to introduce localised limitations on people socialising in Belfast, Ballymena and other areas with high infection rates.

Mr Swann said: “In light to what is being alleged this morning, I am not going to breach the confidentiality of Executive discussions to comment on ill-informed and bogus claims.”

He later told the BBC’s Evening Extra programme: “What we have seen through the Executive is a concerted, united approach as to what steps are necessary.”

There were two further deaths from Covid-19 reported over the weekend in Northern Ireland, the Department of Health said.

There have been 109 new confirmed cases in the last 24-hour reporting period as health chiefs grapple to contain rising rates.

Limits on social interaction between households in the Belfast council area were agreed last week.

East Antrim MP Mr Wilson said on the BBC’s Good Morning Ulster programme: “If the technocrats in the Department of Health and if some of the ministers in the Executive had had their way these restrictions would be far more severe and many businesses would be experiencing far, far greater difficulties as a result of them.”

People living in Ballymena town and postcode areas BT43, BT28 and BT29 have also been given guidance discouraging non-essential journeys outside the affected zones.

There will also be new legally enforceable social restrictions, with residents in these areas barred from visiting other households.

There are a number of limited exceptions, including childcare provision and households that have formed a social bubble with another.

No more than six people, from no more than two households, are allowed to meet in private gardens.

She said: “We don’t discuss the ins and outs of Executive business. Those who do should make more effort to be accurate.”

A spokesman for the SDLP said: “The comments made by Sammy Wilson have no basis in reality.

“The DUP should explain why one of its MPs is relating false reports from Executive meetings.”