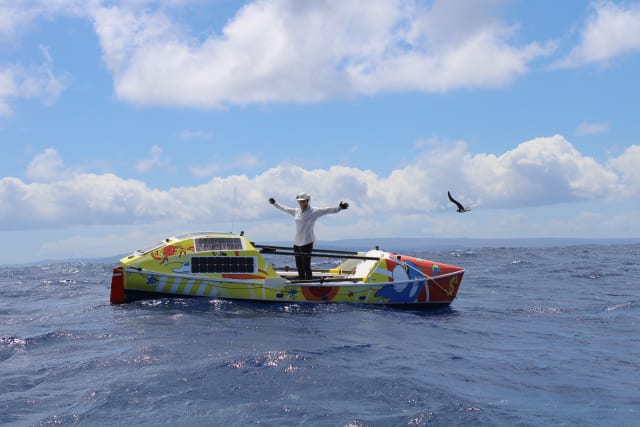 A Briton has set a new women’s world record for rowing solo from the US mainland to Hawaii.

Lia Ditton, 40, described the 86 day, 10 hour, five minute and 56 second voyage from San Francisco to Hawaii as “the greatest psychological challenge of my life”.

The London-born rower faced illness just before the June 17 start, two capsizes, a shortage of food, and persistent adverse currents and winds to break rower Roz Savage’s 2008 record of 100 days.

There was a warm welcome as she reached Waikiki Yacht Club on the island of Oahu on September 12 at 6.10am.

Her record breaking attempt almost ended just a day after it began as the Continental Shelf left her tackling currents, winds and waves the size of buildings which all thwarted her progress.

She spent her days clawing her way west and away from the California coast to make up miles lost while drifting at night.

She also had to cope with the news in June that fellow rower Angela Madsen, 60, had died during her attempt on the same route after 57 days.

Ms Madsen was a former US Marine who overcame extraordinary adversity to become a Paralympian shot put medallist and a world rowing champion and it was a reminder of how dangerous Ms Ditton’s own voyage could be.

A rogue wave capsized her 21-foot boat on July 6 and plunged her headfirst into the dark ocean.

She used all her strength to roll the boat back herself and rejected an idea to abandon the vessel.

She had to make a number of maintenance repairs, including changing the oarlock height after the base cracked, and conquered one of her greatest fears by twice leaving the boat to get in the water to remove barnacles.

Despite the hardships, there were also moments of joy, wonder and encounters with nature, as Ms Ditton witnessed spectacular rainbows, nighttime skies, sunsets and sunrises, while sharks, flying fish, yellowfin tuna, seabirds and squid all came close, or onto, her boat at different times.

Weather, navigation and safety officer Larry Rosenfeld  said: “Lia did an amazing job, this row was so much harder than any of us ever imagined.

“She had done 1,000 miles down the California coast in one month and I thought that that would be a much harder row, but this row tested everything that she had right up to the last hour of the row.”

Ms Ditton plans to spend weeks recuperating before travelling home to her base in San Francisco.

Her next target is to try to become the first solo rower to cross the North Pacific, by making the 5,500 miles journey from Japan to San Francisco in spring 2021.