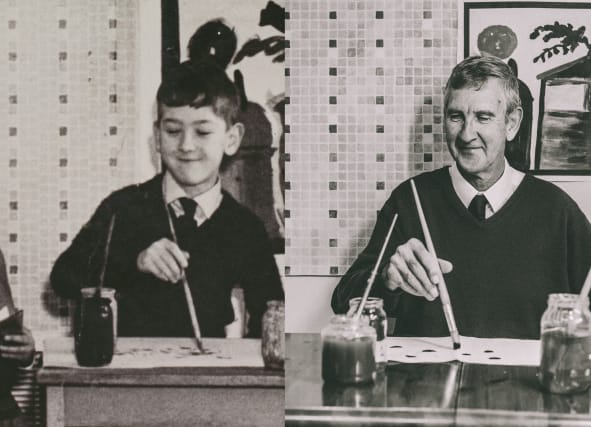 People affected by dementia have recreated old photographs of themselves to encourage others to join the Alzheimer’s Society’s Memory Walks.

It is thought that old photographs are one of a number of things that can help to trigger memories and past feelings for people with dementia.

Keith Oliver, 64, from Canterbury is one of those who has enjoyed the challenge, saying it helped him return to his childhood. He was diagnosed with Alzheimer’s disease almost 10 years ago.

“It’s been a while since I painted, even though it was my favourite thing to do as a young boy, but me and my grandson sometimes paint toy soldiers together,” he said.

“Recreating this photo has been a wonderful way of returning, if only for a little while, to my own childhood.”

Christine Seddon, 69, from London, chose a photo of her and her partner Victor, 75, who was diagnosed with Alzheimer’s earlier in 2020.

“This photo means a great deal to me as it was taken at a working men’s club in Tottenham – this was the place where we first laid eyes on each other in 1970,” she said.

“The rest is history – we’ve now been together for 50 years and have two children.

“This was the place we had lunch on our wedding day, where we held our children’s birthday parties, where Vic and I went to the most amazing dances – the room was always full of laughter and loved ones.”

With World Alzheimer’s Day taking place on Monday 21 September, the Alzheimer’s Society is asking people to complete a Memory Walk, an event sponsored by Santander, the day before, to raise money towards vital support.

The charity has been hit hard by the pandemic, and could lose up to half its annual income as a result, while people affected by dementia have suffered from a lack of social contact which has seen symptoms increase and mental health suffer.