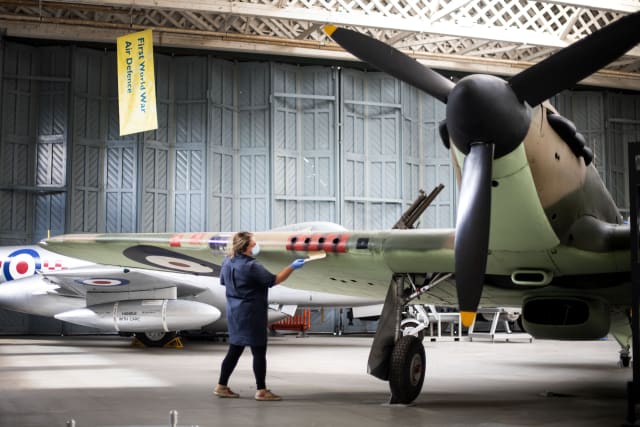 An Imperial War Museum (IWM) curator has said he hopes a special exhibition to commemorate the 80th anniversary of the Battle of Britain will preserve the stories of those involved that are “fading fast from living memory”.

John Delaney, head of the Second World War curatorial team at the IWM, said the exhibition aims to capture the local and personal aspects of operations which took place at the sector station at RAF Duxford, Cambridge.

The station provided support against the relentless assault of the German Luftwaffe during the conflict, which saw intense fighting in the skies and bombing raids launched on towns and cities across the country.

“What we’ve done is put together the Duxford contribution to the day and we researched by going through the combat reports and the diaries of the participants who flew out of Duxford,” said Mr Delaney.

“From that we can sort of jigsaw puzzle it all together and create a script from that and you get an audiovisual feed of Duxford’s contribution.

“We very much focus on Duxford’s role, what the team was doing and what their contribution was on the Battle of Britain Day.

“We’re all very conscious here of the last few first person accounts, there’s only a couple of guys left who were there. There’s only one pilot left and a couple of ground crew.

“It’s fading fast from living memory and I think it’s up to us to make sure that it is continued into the future and that we do our best to interpret the personal stories of those people who were there who contributed.”

The exhibition features video explanations and interactive displays as well as a multi-sensory experience of what the control room felt like on September 15 1940, the day of the battle.

An aircraft hangar at the site has also been transformed to allow visitors to get up close to Second World War aircraft including a German Messerschmitt Bf 109.

Mr Delaney added that the exhibition is intended as a “family friendly” introduction to Duxford’s role in the Battle of Britain.

“We’ve not aimed it at the aviation enthusiasts or the military historian, it’s very much aimed at that family-friendly audience,” he said.

“It’s pitched so that an ordinary member of the public, who wouldn’t know anything about the Battle of Britain, will learn about the contribution of certain individuals but also Duxford’s part in the battle.”

The annual Duxford air show to commemorate the battle has been cancelled this year due to the coronavirus.