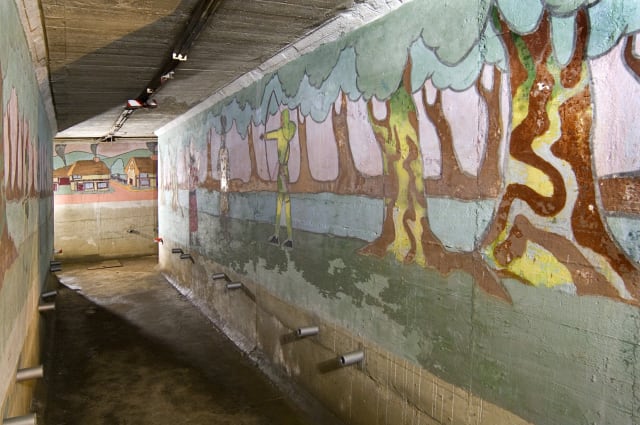 A colourful air raid shelter and a cleverly disguised bunker are among several “unusual” sites that will be added to the National Heritage List to mark the 80th anniversary of the Battle of Britain.

The Department for Digital, Culture, Media and Sport (DCMS) has listed four new sites and upgraded three others, on the advice of Historic England, as part of wider commemorations taking place.

The DCMS said the new listed sites paid tribute to the “greatest generation” that fought for the country’s freedom.

Buildings listed by Historic England are given special protections and are maintained due to their cultural or historical significance.

The murals were originally designed to provide distraction and comfort from the bombing raids, and were painted by the boys and their art teacher between 1939 and 1941.

The shelter, which is mostly set beneath a nearby meadow, remains in its original configuration and is a well-preserved example of a late 1930s reinforced “cut and cover” air raid shelter.

It has been newly listed as Grade II.

A dug-in guard post, also known as a pillbox, which was cleverly disguised as a roofless cottage to protect the area from German invasion, has also been listed as Grade II.

Its exposed location near Druridge Bay, Northumberland, meant that such camouflage would have been essential, and it survives virtually unaltered.

Also added to the National Heritage List by the DCMS are a rare Chain Home radar defence tower in Essex, and a war memorial to commemorate civilians in Dorset who lost their lives during the war.

Historic England said that, with their variety, the new sites show how the Battle of Britain has left its mark across England.

Heritage Minister Nigel Huddleston said: “The Battle of Britain affected every corner of our nation and it is right that, as we mark its 80th anniversary, we protect the sites, memorials and buildings paying tribute to those who fought and those who lost their lives.

“I am pleased that by protecting these sites we can continue to tell the story of the Second World War and keep alive the stories of this greatest generation who fought for our freedom.”

Duncan Wilson, chief executive of Historic England, said: “Memories and perceptions of the Second World War have been central in shaping the national identity of the UK, with the Battle of Britain having particular resonance.

“Many of the physical reminders of this extraordinary period still stand amongst us today, such as the murals in the air raid shelter inspired by the children’s favourite books and the looming radar air defence tower, respectively listed and upgraded today.

“We are pleased to recognise their significance 80 years on and to remember this important turning point in our history.”

Two sites have been newly upgraded from Grade II to Grade II*, meaning they are of particular national importance or special interest, including another Chain Home Transmitter Tower,at RAF Stenigot in Lincolnshire, and a memorial to the Polish Air Force in  Northolt, west London.