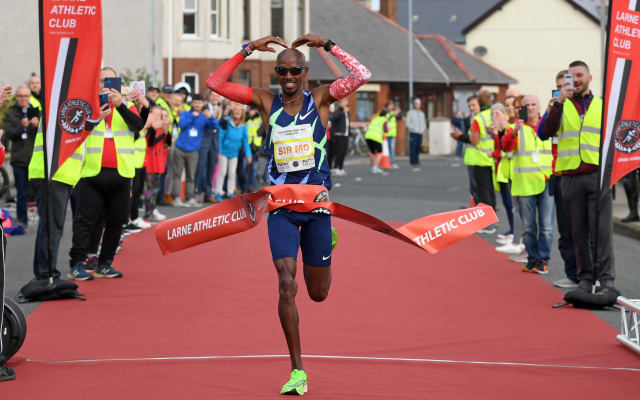 Great Britain’s star long-distance runner broke the one-hour world record on his return to the track earlier this month.

On Saturday he took part in the P&O Ferries Antrim Coast Half Marathon near Belfast and finished in around 60 minutes 30 seconds.

It was one of the first major sporting events following coronavirus lockdown and spectator numbers were significantly down on the tens of thousands ordinarily expected.

Rick Monroe, aged 51, and from Newtownards in Co Down, watched from the side of the road with his son.

He said: “My son is in a running club. He is 13 and has always idolised Farah.

“The chance to see him in person was too good to pass up.”

Saturday’s redesigned course promised to be one of the flattest and fastest in the UK & Ireland, taking in many prominent landmarks and stunning scenery along the route.

Starting at the Chaine Memorial tower built in 1888, the course makes its way through Larne town before moving onto the Antrim Coast Road.

The stunning landscape was recognised by the makers of HBO’s Game Of Thrones, who used the area extensively as one of their filming locations.

Turning homeward at Ballygally Castle the course offers one of the fastest finishes to any road race.

Athletics events came to a halt in March along with the rest of organised sport in a bid to slow the spread of coronavirus.

Spectators were urged to watch the online stream of the race instead of attending.

Those who did go in person were well marshalled and police were in attendance.

Mr Monroe said: “It has been brilliant.

“We had our masks at the ready if there was going to be any crowding but we were just trying to be conscientious spectators.

“Everyone is nicely spaced out and there are marshals and one police officer so it is well organised.”

Mid and East Antrim Borough Council mayor Peter Johnston said normally tens of thousands would be expected to watch such an event but numbers were dramatically down due to the public health emergency.

“People have tuned in and watched it live,” he said.

“It is a real coup for Larne.

“This would be one of the most scenic races that we would have in Northern Ireland.”

Schools given Holocaust books to counteract exposure to conspiracy theories

Furlough scheme to end on October 31