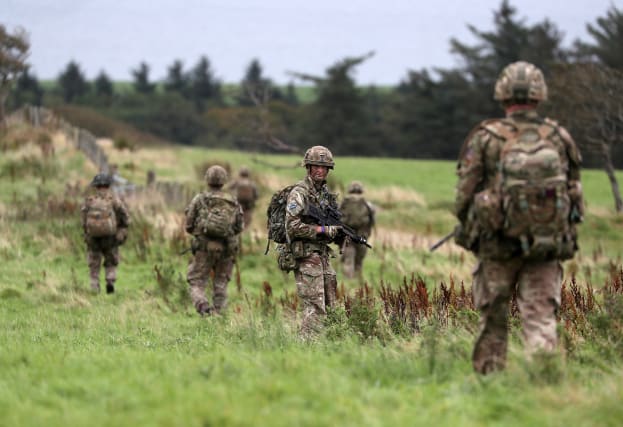 A British Army regiment is operating in coronavirus bubbles as soldiers return to combat exercises after spending lockdown providing civilians with Covid-19 tests.

Over acres of farmland, around 250 soldiers are planning and executing operations under stringent new safety procedures to prevent the spread of the virus.

Soldiers are arranged in household groups of 10 to 15 people within larger cohorts, and avoid contact with other squadrons.

“Each of us will be distinguished by various signs such as wristbands to identify who everyone is and which cohort and household they are in,” he said.

“There are about 250 soldiers in total in the exercise that are deployed here but [most] of those are socially distanced from each other so actually for the most part we only see a small number of us on any one day.”

The exercise – Solway Eagle – is the first for the regiment since lockdown, and Major Champion said its purpose is to return troops to their “core soldiering skills”.

During lockdown, his soldiers were in car parks across Scotland providing testing facilities for Covid-19.

“It’s not difficult to retool for that sort of thing as we are generally quite agile in our thinking,” he said.

“We are here to help in any way we can and is needed. We handed over that task to the Scottish Ambulance Service who are doing great work in carrying on those mobile testing units, but if we are needed in future then of course we are happy to help.”

Trooper Daniel Higham of C Squadron has been in the Army for two years and said his squadron is still able to operate as normal despite the restrictions, it just “takes slightly longer”.

He delivered testing kits to the public during lockdown.

“It was something different – I don’t think anyone else would be saying they were doing that in the Army in other times,” he said.

During the exercise, the regiment will train in basic infantry skills, reconnaissance and mounted and dismounted movement.

Trooper Troy Clark took part in an exercise to conduct a night ambush and said the soldiers train exactly as they would operate overseas.

“Due to Covid-19 we’ve implemented different measures to counteract that,” he said. “If you come into contact with someone who is wearing a different coloured band you know to keep the two metres distance.”

Trooper Danny Cuthbert of B squadron said that before the pandemic “everyone was in everyone’s face, we’d probably be sharing food and water and being pally with each other”, but that has all changed.

Lieutenant Alex Humphries is third troop leader in B squadron, which operates out of Jackal vehicles and takes part in reconnaissance missions.

He said the exercise is “blowing off the cobwebs that the global pandemic thrust upon us”.

He said it was important to the regiment’s soldiers to be supporting the NHS during the pandemic.

“We were out seven days a week rotating through the testing of the general public,” he said. “We had Royal Scots Dragoon Guards soldiers everywhere from the west coast to Mull to Islay, and that was incredibly rewarding.

He said the Army was able to help as it is “incredibly flexible”.

He added: “You can’t predict where conflict might come from next so a global pandemic is just another conflict that we can be involved in.

“We’ll do whatever is asked of us. We are more than happy to support the NHS in Scotland.”