Pub and restaurant sales back on track after Eat Out boost 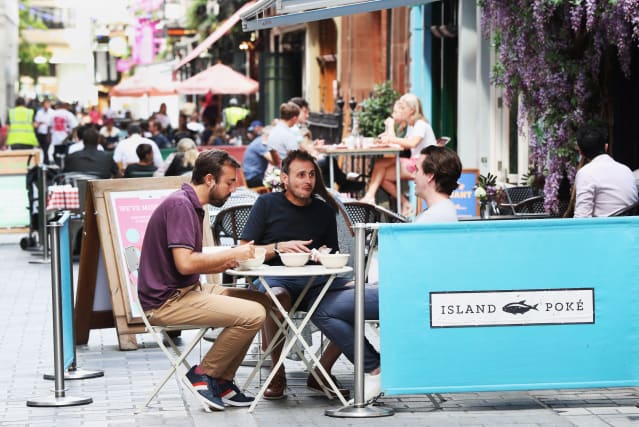 Restaurants, pubs and bars saw trading levels bounce back to normal levels in August after diners devoured Eat Out To Help Out discounts, according to new figures.

Hospitality businesses saw like-for-like sales in August stay flat against the same month last year after a strong rebound from July, according to the monthly Coffer Peach business tracker.

However, it said that total sales were still 12.2% below last August’s levels as only 85% of group-owned sites had reopened.

“To get back to last year’s sales levels in those sites that were able to trade is some achievement just a month after the industry started to reopen, and credit has to go to the Government-backed discount scheme that attracted so many people back out to eat, plus the cut in VAT on food,” said Karl Chessell, director of CGA, the consultancy which produces the tracker.

“But of course not all parts of the market benefited, and there will also be concern about what the Government’s new legally-enforced restrictions will have on consumer confidence in the weeks ahead.”

Restaurants had a particularly strong month as they benefited from a surge in demand driven by the half-price discount scheme as well as lower VAT on food and soft drinks.

Restaurant sites reported that like-for-like sales were up 13.5% against August last year.

However, total sales remained down 10.9% on last year, with only 65% of chain-owned sites which operated in February open during the past month.

Pub groups had a more mixed trading performance, with like-for-like sales down 3.6% against last August, with total sales down 9.4%.

The figures revealed that food-led pubs performed strongly, reporting 5.3% like-for-like growth, while drink-focused sites traded down 11% after not receiving the benefits of the Government subsidy schemes.

Meanwhile, bar groups had the toughest month, with like-for-like sales down by 27.6%, and total sales 37% lower.

Paul Newman, head of leisure and hospitality at RSM, said: “These results demonstrate what a huge success the Eat Out To Help Out scheme has been in spurring households to visit pubs and restaurants in August, many for the first time since lockdown began.

“It is no surprise that food-led businesses benefited most with the proportion of delivery sales seeing a temporary dip from the highs of lockdown.

“September is another crucial month for the sector with the furlough scheme starting to unwind and the rent moratorium due to end.”