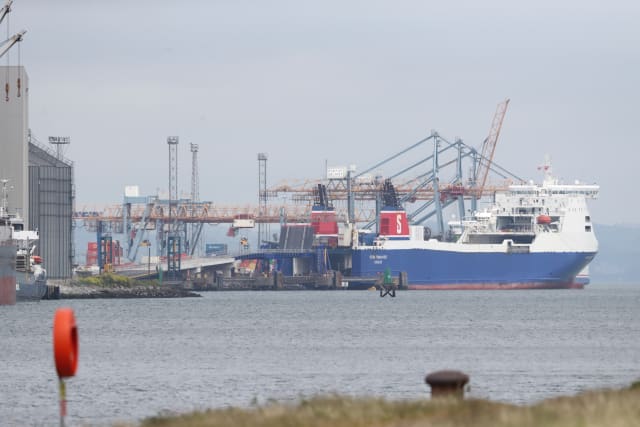 Stormont ministers are to resume debate on a contentious proposal to stall work on new Brexit port checkpoints following fractious exchanges on the issue.

It is understood agriculture minister Edwin Poots is seeking to halt construction of the new Irish Sea infrastructure following the Government’s legislative move to guarantee unfettered access throughout the UK’s internal market.

In the summer, the Government said enhanced regulatory checks would be required on animals and food products crossing the Irish Sea from Great Britain to Northern Ireland under the terms of the Brexit deal.

The Executive assumed a legal responsibility to undertake the work for the Government to enable it to fulfil its international obligations under the Withdrawal Agreement.

Northern Ireland’s main ports have since been expanding their Sanitary and Phytosanitary (SPS) checking facilities – in work carried out in conjunction with Mr Poots’ department.

When the port infrastructure issue was raised it prompted robust and heated exchanges, involving both rival politicians and a senior civil servant.

One source described it as “hot and heavy” and another characterised it as a “shouting match”.

A vote proposing the halting of the work was defeated but the issue is due to be revisited when ministers meet again.

The meeting was adjourned around 9pm so legal advice could be sought.

Attorney General Brenda King has been requested to provide ministers guidance on whether stopping the work would undermine the Executive’s legal obligation to carry out a Government instruction.

The meeting is due to reconvene on Friday, if the advice is ready.

The Government has faced intense criticism after it published its Internal Markets Bill earlier in the week – legislative proposals that Northern Ireland Secretary Brandon Lewis admitted would break international law.

Specifically, the Bill, if enacted, would undermine parts of the Northern Ireland Protocol contained within the EU Withdrawal Agreement struck by the EU and UK.

Under the protocol, which will kick in if no wider trade deal materialises, Northern Ireland will continue to follow single market rules for goods and administer the EU’s customs code at its ports.

Under the terms of the protocol, extra regulatory checks are required on goods entering Northern Ireland from GB.

Goods crossing the Irish Sea will also be subject to customs processes to differentiate between products destined solely for Northern Ireland and those set for onward transport across the Irish border into the EU.

The Bill gives the Government the ability to override a number of provisions with the protocol.

Namely, ministers would be able to ditch the requirement for goods going from NI to GB to fill out export declaration forms.

The Government would also not have to adhere to a requirement to follow EU rules on state aid on all goods related to Northern Ireland.

Mr Poots would not be drawn into confirming whether he intended to halt work on the checking facilities when asked in the Assembly on Tuesday.

He instead said: “We will just have to wait and see how things are taken forward.”

But he made clear that he was not in favour of building the infrastructure, emphasising that it was a UK Government decision.

“They have agreed a protocol that I do not agree with, quite frankly,” he said.

“That protocol has the potential to cost every home in Northern Ireland additional money as a consequence of adding checks, which will have a cost to business that will be passed to consumers.

“It is incredibly important that consumers are not impacted. The consequence of lorries that are bringing food from Britain to Northern Ireland, which we will consume, having to go through checks, has the potential to cost the people who you represent more money.”

He added: “I am not one who wants to create any barriers, and I am not looking for barriers to be created between Northern Ireland and the Irish Republic either, for that matter.