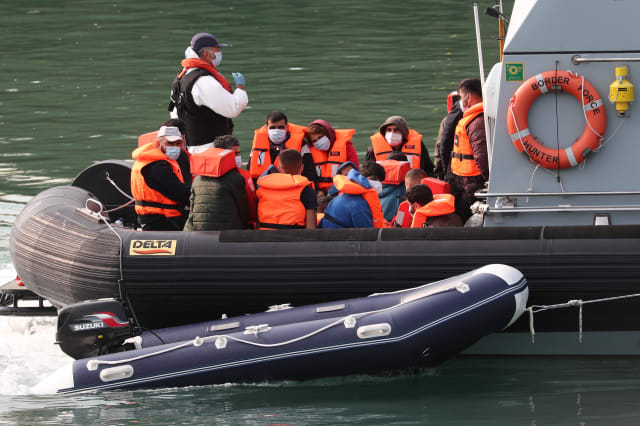 Hundreds of migrants crossed to the UK in a surge of small boats on Friday, taking the total number for the year above 6,000.

Huge numbers of people took advantage of sunshine and calm seas to cross to the UK from northern France.

At least 319 people travelling in 27 boats made the dangerous crossing, according to the Home Office.

More than 6,100 migrants have now succeeded in reaching the UK by small boat in 2020, data analysis by the PA news agency shows.

The latest arrivals come despite Home Secretary Priti Patel’s vow to make the route “unviable”, and the continued row between the Home Office and the legal profession on how to tackle the crossings.

Border Force vessels were active in the Channel all day as they and partners were constantly on the lookout for boats crossing from continental Europe.

The operation was co-ordinated by the coastguard, with the RNLI also working to help preserve lives.

Dozens of people wrapped in blankets and wearing lifejackets were seen being taken into the port of Dover.

After a lull in people attempting the dangerous crossing over the last few days, crossings resumed in large numbers amid low winds.

The suspected migrants were seen being escorted up the gangway to the harbourside, where were processed by immigration officials.

With so many arriving at one time, many had to wait on board the Border Force boats until they were allowed to go ashore.

One Border Force rib was later seen towing four dinghies into the harbour, which are believed to have been used by the migrants.

Clandestine Channel Threat Commander, Dan O’Mahoney, said: “This morning I was out on a cutter in the Channel working with Border Force officers dealing with these boats.

“The unseaworthy vessels I saw provided further evidence that these crossings, so often facilitated by criminals, are risking people’s lives.

“We are working with the French to make this route completely unviable, and this morning the French prevented more people from embarking on this perilous journey – but we know the numbers arriving are still too high.

“These migrants are leaving France, which is a safe country.

“Those seeking refuge can and should claim asylum there, rather than attempting these dangerous crossings to the UK.”

On the other side of the Dover Strait, French police reportedly saved the life of a young migrant who could not swim.

Officers jumped into the water to save the young Iranian, who had fallen from his boat, according to France Bleu Nord.