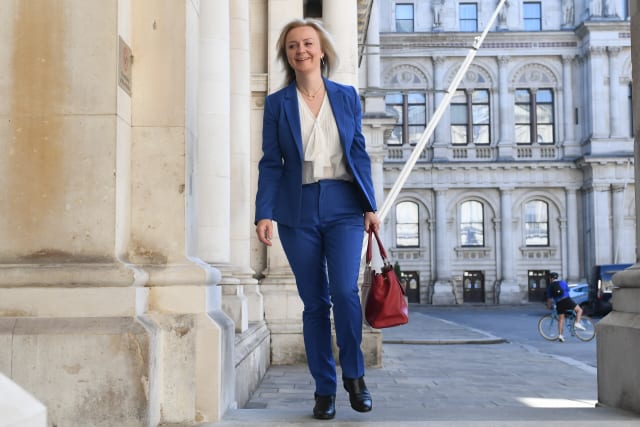 Ministers have been urged to “redouble” their efforts to secure a post-Brexit free trade deal with the EU after the Government announced it had secured an agreement with Japan.

International Trade Secretary Liz Truss said it was a “historic moment” for the two countries which will bring “new wins” for British businesses.

But Labour said it was important to put the deal in “perspective”, stressing that even though the agreement was “welcome”, the net benefit would amount to just 0.07% of GDP.

The agreement comes as hopes of a trade deal between the UK and EU hang in the balance after Brussels demanded the UK abandons plans to override key elements of the Withdrawal Agreement.

Shadow international trade secretary Emily Thornberry said: “Trade with Japan represented 2.21% of our global total last year, and under the best case scenario put forward by the Government, today’s agreement will see that total increase by just 0.07 percentage points each year, simply maintaining the levels of growth seen since 2015, and preserving the forecast benefits of the current EU-Japan agreement.

“That all compares to the 47% of our global trade that we currently have with the EU.

“So, necessary as this agreement is, the Government’s overriding priority has to be securing the oven-ready deal that they promised us with Europe, which Japanese companies like Nissan have told us is crucial to the future of the investment and jobs they bring to Britain.”

The British Chambers of Commerce (BCC) said the deal was “undoubtedly a cause for celebration” but that securing a free trade agreement with the EU “remains critical to the future of businesses in the UK”.

BCC director-general Adam Marshall added: “We urge ministers to redouble their efforts to reach a comprehensive partnership with our largest trading partner at a crucial time in the negotiations.”

And the Society of Motor Manufacturers and Traders chief executive Mike Hawes said: “For both sides to benefit fully, we still need to urgently complete an ambitious and tariff-free UK-EU deal – and time is rapidly running out.”

The UK-Japan Comprehensive Economic Partnership Agreement was agreed in principle by Ms Truss and Japan’s foreign minister Motegi Toshimitsu in a video call on Friday morning.

Negotiations began in June – with most talks happening remotely due to the coronavirus pandemic.

A final text of the agreement is likely to be published in October.

The Government expects the deal to increase trade with Japan by an estimated £15.2 billion.

Under the agreement, almost all exports to Japan (99%) will benefit from tariff-free trade, and there will be more protection for goods with geographical indications, including Yorkshire Wensleydale and Welsh lamb.

It will provide more liberal rules of origin and will allow producers of coats, knitwear and biscuits to source inputs from around the world for exports to Japan.

Tokyo has also guaranteed market access for UK malt exports under a more generous quota than that with the EU, as well as tariff reductions for UK pork, beef and salmon exports.

Japanese and British companies will also be able to move employees and their dependants into each country more easily under the terms of the agreement.

Downing Street said the UK had accepted rollback on “some very specific products that we don’t export”, including Udon noodles.

Prime Minister Boris Johnson congratulated Ms Truss and the negotiators, and tweeted: “We have taken back control of our trade policy & will continue to thrive as a trading nation outside the EU.”

“The agreement we have negotiated, in record time and in challenging circumstances, goes far beyond the existing EU deal, as it secures new wins for British businesses in our great manufacturing, food and drink, and tech industries.