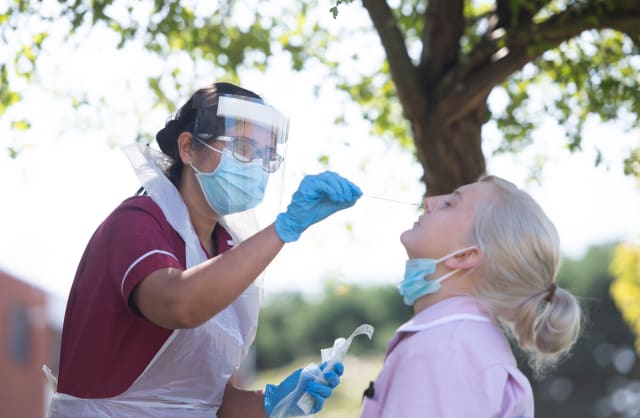 Measures limiting social interaction between households amid soaring Covid-19 infection rates in areas like Belfast and Ballymena were announced on Thursday.

He said: “There is an element of frustration because the vast majority of people are doing their utmost to adhere to regulations on social distancing and wearing a mask.

“There is frustration because we keep getting mentioned in dispatches.”

The acting president of Ballymena Area Chamber of Commerce and Industry said nobody who asked him for clarification was saying they were not going to abide by the restrictions.

“They are more than willing to do it because they see that it will work but it is just around the clarity of the messaging.”

People living in the Belfast council area, Ballymena town and postcode areas BT43, BT28 and BT29 have been given guidance discouraging non-essential journeys outside the affected zones.

There will also be new legally-enforceable social restrictions – residents in these areas cannot visit other households.

Exceptions include those in a social bubble with one other household and those with caring responsibilities including childcare.

No more than six people, from no more than two households, will be permitted to meet in private gardens.

The restrictions will be in place for a minimum of two weeks.

She added there was a need to “push down on the rising curve of infection”.

The McKeever Hotel Group includes the Adair Arms in Ballymena.

A spokeswoman said the changes were of concern.

She added: “The ground will continuously shift and we are trying to do our best to muddle through and help people to do their best to support the industry.

“All we can do is put our best foot forward and make sure our safety protocols are in place.

“The last thing we want is to put anyone at risk.”

He said: “We can’t close our country down because of Covid.”

At the same Stormont executive meeting, ministers decided that pubs that do not serve food can provisionally aim to reopen on September 21.

Pubs that do serve food were able to reopen at the start of July.