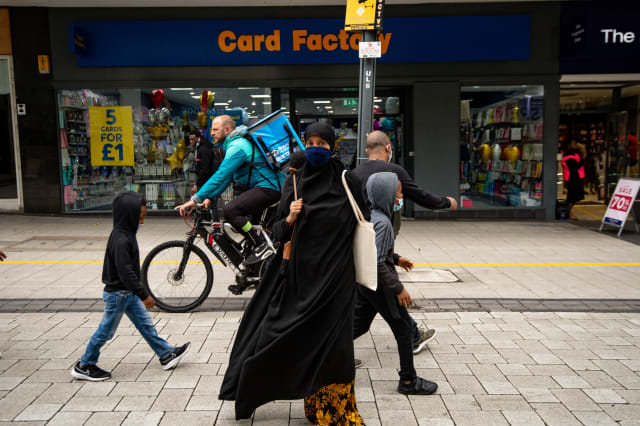 Tough new Covid-19 lockdown measures banning people from mixing in homes and gardens will be imposed on Birmingham in response to a rocketing infection rate.

The city has the third-highest rate of infections in England, behind Bolton and Sunderland.

The same curbs will also be placed on the city’s neighbouring boroughs Sandwell and Solihull from Tuesday September 15, after significant rises in cases there.

Describing the virus as “relentless”, Birmingham City Council’s leader, Councillor Ian Ward, also warned that unless infections were brought under control, much tougher sanctions could be imposed.

The latest seven-day infection rate for the city showed 78.2 cases per 100,000 people, with 892 infections in the period to September 8.

For the previous seven-day period, the rate was just over 30.

The lockdown measures were announced by West Midlands mayor Andy Street on Friday, and included a warning from the region’s chief constable that anyone “calculating” a way to flout rules on gatherings risked a £10,000 fine.

The measures, agreed with Government after two days of discussions with regional health and council leaders, will impact up to 1.7 million people, almost 1.2 million of whom live in Birmingham.

The ban on households socialising with other people outside their social bubbles will come into force on Tuesday, although people have been urged to start following the guidance ahead of the weekend.

The new rules come after household mixing was “identified as one of the drivers of transmission” for infections, Mr Street said.

The mayor added the ban would not affect schools, workplaces, transport or universities – which are reopening this month – but was specific to households.

The Government’s “rule of six” will still apply to licensed venues, hospitality premises and shops and weddings and funerals will also continue to be governed by the 30-person maximum.

Mr Street said a full Government announcement on measures, potentially affecting other areas of the country, would be made “later”.

Birmingham’s director of public health Dr Justin Varney had previously said the uptick in cases was “linked primarily to private household gatherings” at the end of August and across the bank holiday weekend.

Cllr Ward said the new restrictions applied on both sides of the city boundary, meaning people could not host anyone at their homes or gardens in Birmingham, nor could they travel out of the city to meet people at a home in an unaffected area.

He said analysis of infection data showed it was “much easier to inadvertently pass on the virus in someone’s house where people are more relaxed and less vigilant”, than it was in pubs, bars, cafes and stores.

Cllr Ward added: “I understand that it may be frustrating that you can go down the pub but not see your family, but the data we have shows the infection rate has risen mainly due to social interactions, particularly in private household gatherings.”

“The virus has not gone away, it has not weakened, in fact it is relentless. We must be relentless in our efforts to control the spread.”

Cllr Ward added the region’s seven councils had written to the Government asking for extra resources for measures like Covid marhsals, and a “route map” on how and when the measures could be lifted.

Clive Wright, Covid-19 West Midlands’ convenor, said the region had reached a “critical point” and it was down to “each and every one of us” to follow the rules.

Councillor Ian Courts, Solihull’s council leader, said the rise in cases had been “quite exceptional”, almost tripling in a week.

He said health officials in the borough had been particularly concerned about the “pattern of spread” throughout all ages and areas of Solihull.

In the whole of August, the borough recorded 84 cases, but in the first week of September alone it had 135 people test positive for Covid-19.

Solihull’s latest infection rate for the week ending September 8 was 62.8, while Sandwell’s was 42.8.

Councillor Maria Crompton, Sandwell council’s leader, said a large proportion of the area’s infections were in those aged “between 20 and 40 years”.

In a “blunt” message for residents, some of whom she said had become “complacent”, she added: “Covid-19 will – and does – kill.”

“If you don’t follow these rules, it (Covid-19) will come and visit your family, you will know a family member, or someone close, very shortly, that will die,” she said.

The new precautions come as England’s biggest hospital trust, which runs four hospitals in West Midlands, said it currently had 72 patients with coronavirus – the youngest of whom is just 20.

The University Hospitals Birmingham NHS Trust also said it had nine Covid-19 patients in intensive care, with the youngest aged 24.

Birmingham was deemed an area in need of “enhanced support” last month on the national Public Health England watchlist, before becoming an “area of intervention” on Friday.

Elsewhere, Bolton’s seven-day rate currently stands at 143 cases per 100,000, and Sunderland is at 84, according to data from NHS Digital.

Leeds, which is in 13th place on the infection rates table with 60 cases per 100,000, could also face tougher measures soon. A total of 474 new cases were recorded in the city over the week.