‘You see a community at its worst’: British volunteers on deployment to Beirut 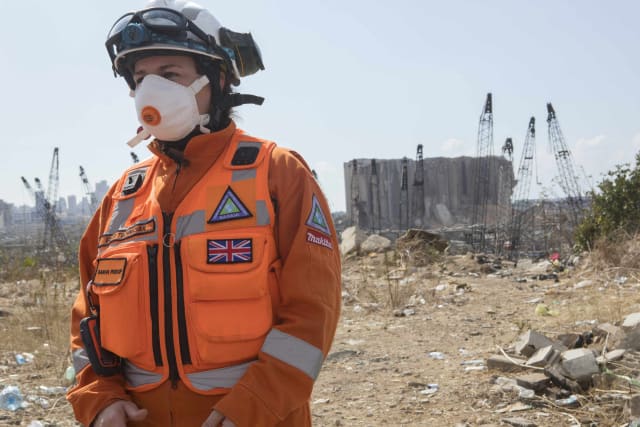 Less than 48 hours after a catastrophic explosion rocked Beirut, British volunteers were among those assisting disaster relief teams across the city.

A team, including paramedics, structural engineers and firefighters, was deployed to Lebanon by a small UK-based charity, Saraid (Search And Rescue Assistance In Disasters), which set up and ran a damage assessment co-ordination centre in the capital.

More than 190 people were killed and 6,500 others injured when 3,000 tons of ammonium nitrates detonated in a port-side warehouse on August 4.

Volunteers spoke with the PA news agency just hours before Beirut was hit by a second disaster –  a huge fire in the port just a month after the blast, which triggered further panic among residents.

He told PA: “We worked within a window of survivability, and that can range from anything from five to 15-20 days. It depends on the circumstances around the trapped individual. So we never give up hope.

“I’ve been 29 years in the fire service, and I’ve seen similar horrors here in the UK. I don’t think you ever get used to it when you see life at its rawest state.”

Mr Davis has been working with the charity for 20 years, being deployed to humanitarian crises around the world.

“You’re going to see a community at its worst, badly affected by a disaster. That’s a lot of human suffering.

“You’ve got to make peace with yourself that you potentially could see some quite horrible things and witness difficult situations.

“But you’ve got to balance that with an element of knowing you’ve got some training that may be of help to these communities.”

Structural engineer Suzie Cooper provided rapid building assessments following the disaster, to see if buildings were safe for residents to move back into. She arrived in the city just four days after the explosion.

This was her second deployment with Saraid, having previously been sent to Albania following the November 2019 earthquake.

She said: “It’s a stressful, it’s tiring and it’s a tough experience. For me, the most poignant moment was the morning after we landed. It was quite dark when we landed so we didn’t see much.

“But the morning after (we) did a bit of a reccy of the city and we drove down to the port. And coming up to the port, before you even get there, there are quite a few buildings that are severely damaged, and steel entangled within itself and you get to the port and, for me, that was really poignant and hard-hitting – because there is just nothing there.

“It’s all just a mass of steel and all completely flattened. It’s hard to forget something like that.”

The 26-year-old, who works at London-based company Elliot Wood, said the level of damage was difficult to comprehend.

“There is just glass everywhere,” she said.

“That just makes you realise how big an impact this had because that goes on for miles from the port.

“Everyone in the city was severely affected by it, and they all have a story of how horrific it was. Their stories of being there when that blast happened – everyone talks about how it was just raining glass – that was quite emotional, talking to the locals and hearing their stories.”

Saraid is staffed entirely by volunteers and is a UN-recognised search and rescue team.

The charity spent a week working with locals in the city, with teams required to isolate upon their return to the UK.

The cost of deploying the team for a week was around £10,000, funded entirely by public donations. Keen to return to Lebanon in the near future, Saraid is currently fundraising to be able to do so.

Mr Davis said: “I think my overriding memory is of how warm the local community was. They were just extremely affable people that have been caught up in a major disaster.