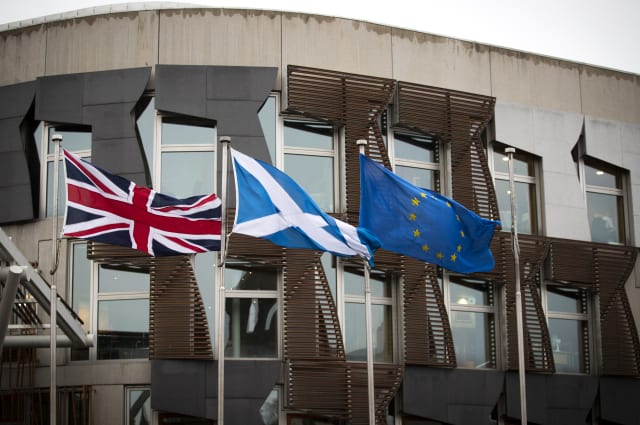 The UK Internal Market Bill is incompatible with devolution and will “trash the UK’s already tarnished international standing”, Scotland’s Constitution Secretary has said.

He added the Scottish Government will fight the “entirely unnecessary and deeply damaging” Bill, arguing it will be “breaking and discarding” the devolution settlement.

“This Bill is actually a shabby blueprint for a much weakened constitutional settlement that would leave Scotland defenceless,” Mr Russell said.

He said it will enable to UK Government to “unilaterally and arbitrarily impose its rules on Scotland, regardless of the wishes of this Parliament”.

Mr Russell added: “(Boris) Johnson’s reckless actions are now aimed not just at us but they will also trash the UK’s already tarnished international standing, put at grave risk sustainable and beneficial trading and economic relationships with most of the world, and weaken, the legal basis of all our lives.

“And all that while he and his irresponsible and reckless Government are hurtling – in the midst of a pandemic and the worst global recession in many generations – towards a hard EU transition deadline of December 31 deadline entirely of its own choosing.”

The UK Government and Scottish Conservatives have suggested the Bill will protect free trade between the four nations, with Mr Johnson telling the House of Commons: “This UK Internal Market Bill is about protecting jobs, protecting growth, ensuring the fluidity and safety of our UK internal market and prosperity throughout the UK.”

During a debate on the Bill, Mr Russell told MSPs there “never has been” a threat to trade.

Instead, he suggested the proposals are an “open door” for “creeping privatisation and rampant deregulation”.

He added: “They are seen widely and correctly as incompatible with devolution, bad for businesses and the consumers, dangerous for the environment and an impediment to necessary and effective devolved public health measures.”

Scottish Conservatives constitution spokesman Dean Lockhart accused Mr Russell of “political bluster” and said the plans will give the Scottish Parliament powers in at least 100 areas previously controlled by the EU, “making it more powerful than ever”.

Mr Lockhart said: “It is now clear the SNP wants to take a wrecking ball to the UK internal market, regardless of how many jobs will be lost – it is, after all, a market they want to separate from.

“They want to hand back powers to Brussels and in doing so damage Scotland’s farming and fishing communities, and any prospect of a full economic recovery.”

On the claim of additional powers, Mr Russell said: “They behave as if our heads button up the back, insulting our intelligence with a claim that this is, in fact, a power surge.

“That is only true in the sense that power surges destroy everything they touch.”

“My view is that, by working together, the devolved governments must now ensure that Boris Johnson and his Tory cabal cannot bypass the agreed devolution settlement, and we should also link up with the regions across England to build that campaign.”